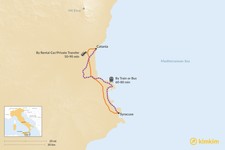 Syracuse is just 41 miles (66 km) north of Catania, Sicily's second-largest city and a stepping-off point for exploring nearby Mount Etna. Many travelers also head to Catania simply to fly home, as a major airport is located there.

Adventurous travelers should check out this 7-day Sicilian bike tour, which includes stops in Syracuse and Catania. Or, for an epic road tour around the entire island of Sicily, including a trek to Mount Etna, consider this 15-day road trip around the scenic Sicilian coast.

By Rental Car or Privat

Leaving Syracuse, drivers follow the S124 provincial road out of the city center, then pick up the E45, a strada statale, or state road, a 4-lane, divided highway. Also called the Autostrada Catania-Siracusa, the E45 is a straightforward drive until you get to the outskirts of Catania. Depending on the time of day, traffic can range from light to very heavy. And the closer you get to the center of Catania, the more at risk you are of inadvertently entering a Zona Traffico Limitato, abbreviated as ZTL.

These are areas where only residents, delivery trucks and municipal vehicles are allowed to drive, and straying into one can result in a heavy fine. In fact, most of the parts of Catania that tourists want to visit are either within walking distance of one another or well-connected by city buses, so a car within the city is really not useful or practical.

If you want to hang onto a rental car to visit Mount Etna or continue your road trip to other Sicilian cities, we suggest you park the car in a secure lot or garage for the duration of your stay in Catania.

Another option is to return your rental car at Catania Fontanarossa Airport, Sicily's busiest airport, and then head into Catania from there on the Alibus airport shuttle. Drive time to the airport from Syracuse is typically 60 minutes or less, and because the airport is to the south of the city center, you can avoid a lot of the heavier traffic.

By Train or Bus

Trenitalia, the Italian national rail company, currently runs 12 daily trains from Siracusa station to Catania Centrale. At just over an hour, Intercity trains are the fastest, while Regionale and Regionale Veloce trains make more stops and take about 10-20 minutes longer to make the trip. The cost difference between the train types is just a few euros. Note that trains run less frequently on Sundays and holidays. Italy's private rail service, Italo, currently does not serve Sicily.

Interbus runs several buses a day between Syracuse and Catania. The cost is about the same as taking the train and the journey takes 90 minutes on average. Unlike the train, buses are subject to the whims of traffic, so there's little advantage to taking the bus.