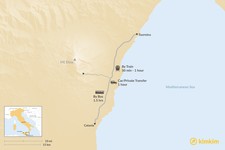 Due to its scattered sights, Sicily is best explored with a car, and since Taormina and Catania are a mere 35.5 miles apart transportation between the two is simple and fast.

On the route between Taormina and Catania, the rental grants the flexibility to stop by for sight-seeing in the many destinations along the way, including Mount Etna (more stops are in this itinerary of a Spectacular Self-Drive Tour Around Sicily)

For those who opt out of driving or are heading to Catania to catch a flight, private transfer is the safest option in avoiding potential delays such as those caused by the frequent strikes in Italian public transportation.

Most transportation options between the two cities are convenient and the train between Taormina and Catania is no exception, but because Taormina's station is located outside of the city center, this option requires an additional taxi or bus ride.

If you plan on heading from Taormina directly to Catania's airport, private transfer may be the best option to make the flight on time as bus and train schedules may witness delays or changes (or the occasional public transportation strike).

Another option on the same highway is a car rental, which is extremely handy when traveling around Sicily if you choose to take on the drive yourself. Whether this option is convenient for you or not depends on how much time you spend outside of pedestrian-only Taormina (see more in this article).

The drive between Taormina and Catania is a good opportunity to make stops along the way, including one for Europe's highest volcano, Mount Etna. Once you leave Taormina, take the A18 for about 28 miles, then exit towards Catania Centro. The drive is smooth and easy to navigate, though not particularly panoramic.

This is the quickest way to get from Taormina to Catania. The sole operator that runs this mode of transport is Trenitalia. High-speed trains are not available, but the slower Regionale or Intercity options still get you to Catania within 30-40 minutes. Tariffs for the Regionale train are fixed, so there is no need to book in advance and you can instead purchase tickets directly at one of the Trenitalia machines at the station. When booking, select 'Taormina-Giardini' as the departure point and 'Catania Centrale' as the destination.

Note that because Taormina shares its station with a nearby village, the walk from Taormina's city center to the train is about 40 minutes. You can choose to take a taxi or private transfer to the station (10-15 minutes) or a local bus run by Azienda Servizi Municipalizzati from your nearest bus stop (15 minutes).

This is another convenient way to get from Taormina to Catania. Using regional bus operator Etna Trasporti, take the bus from Taormina's station on Via Pirandello towards Catania. The bus is also available for transportation to Catania Airport. You can purchase the ticket in advance or directly on-board.