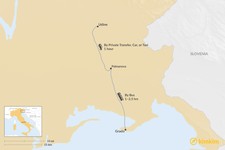 Udine and Grado, two popular destinations in Italy's Friuli-Venezia-Giulia region, are just 33 miles (53 km) apart. Getting from Udine to Grado takes about an hour by car and one to two hours by bus. You can also take a train from Udine to Cervignano del Friuli and finish the journey to Grado by bus, although this is a more complex journey than a car or bus trip.

Driving or hiring a private transfer or taxi to get from Udine to Grado is the most practical option; the two cities are only an hour's drive apart and there are some intriguing places to stop along the way that would be more difficult to reach by bus.

By Private Transfer, Car, or Taxi

The 33-mile drive from Udine to Grado is easily accomplished in an hour or less, depending on traffic. The A23/E55 toll highway takes you to Palmanova; from there, Strada Statale 352 (SS352) and SS352var take you south to Grado.

Both Udine and Grado have a Zona a Traffico Limitado (ZTL), or restricted traffic zone. Do not drive in the ZTL; you will get a ticket, which your rental car company will forward to you for payment.

Along the way, consider a stop at Palmanova, a fortress town shaped like a nine-pointed star built by the Venetian Republic in 1593 as a protective outpost and as a planned community. Palmanova's defensive features, including a moat, were designed to protect Venice from Ottoman incursions. Today Palmanova is part of the Venetian Works of Defence Between the 16th and 17th Centuries: Stato da Terra-Western Stato da Mar UNESCO World Heritage Site.

Southeast of Palmanova, the village of Aiello del Friuli is worth a stop. Aiello calls itself the "village of sundials." To date, over 100 sundials are located in and around Aiello, and more are added every year. If you only have a short time to visit, you can see more than 20 sundials in the courtyard of the Museum of the Rural Civilization of Imperial Friuli.

The ancient town of Aquileia, just north of the causeway to Grado, is definitely worth your time. Here you can see fourth-century Christian mosaics inside a ninth-century church. Aquileia also boasts Roman ruins and several museums where you can see artifacts from Roman and Paleochristian times.

Both APT Gorizia and SAF Autoservizi F.V.G. S.p.A. offer bus service from Udine to Grado. SAF Autoservizi offers a BiciBus, or bus with bicycle racks, on spring weekends and daily during July and August. The BiciBus departs twice daily, with stops in Udine, Palmanova, Aquileia, and Grado.

Breeze through the Friuli Venezia Giulia region for six...

Follow the highlights of the Friuli Venezia Giulia region for more than...

One of Italy's biggest attractions has always been its food, and you can...

Visit the highlights of Northeast Italy on this 11-day trip. Tour the...

The capital of Friuli Venezia Giulia moved from Udine to Trieste, and so...

Discover the Northeast of Italy on this 14-day adventure. Explore...

The Friuli Venezia Giulia region may be small, but it's packed with some...

Taste thousands of years of cultural influences on this 12-day tour...

The Friuli Venezia Giulia region and its neighbors are a work of art in...

Tiana B.
the United Arab Emirates
"This is my 2nd time using kimkim to book a trip and I am so glad I did! This was my first time to go to Italy and I wanted to do/see all the highlights. Ma..." read more
Traveled to Italy solo in December, 2019
C
Cory U.
New Mexico, United States
"Had a ton of fun. All the recommendations for restaurants were on point. The Wine tour was a little underwhelming. That is pretty much my only criticism of t..." read more
Traveled to Italy as a couple in November, 2019
Plan your trip to Italy
Customize your trip with help from a local travel specialist
Plan Your Trip