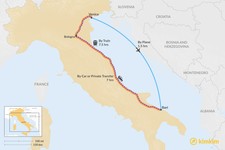 With 282 miles (453 km) separating Venice from the region of Puglia, flying is by far the fastest way to travel. Fly out of Venice and land in either Bari, Puglia's capital, or the city of Brindisi within 1.5 hours. From there, you can either rent a car or take the train to explore the rest of the coast-lined region.

Another option is taking the high-speed train that runs twice a day from Venice to Baci, making the trip in a little under 8 hours while giving you a scenic tour across many regions. Although they take longer, regional trains run throughout the day, too. Renting a car or hiring a private transfer takes just about the same amount of travel time, but it allows you the freedom to drive along the Aegean sea and stop at coastal places along the way.

Once you arrive in Puglia, you can easily travel by train or car from place to place. Consider these 10-day and 12-day trips that start in Alberobello and end in Bari.

Venice Marco Polo airport (VCE) has direct flights to two cities in Puglia: Bari and Brindisi. Both flights take around one hour and 30 minutes from takeoff to landing, so you can pick either option.

From Stazione di Venezia Santa Lucia (Venice's rail station), take the 10-minute bus ride that runs every hour to Venice Airport. While routes going to Bari and Brindisi take the same amount of time to get to from Venice, flights landing in Bari International Airport-Karol Wojtyla (BRI) tend to be slightly cheaper than Brindisi's airport, Papola Casale Airport (BDS).

On arrival in Bari, take the city's privately owned rail Ferrotramviaria that runs hourly to get from the airport to the heart of the city, which takes 12 minutes. If you're landing in Brindisi, take the 11-minute bus that's run by the public transport company Brindisi Spa, which runs every 30 minutes and drops you off in the city center.

While it's not a short travel time to get from Venice to Puglia's capital Bari, this direct route allows you to sit back, relax, and watch the views from your window. The nation's rail company Trenitalia has direct trains running from Venezia Santa Lucia station to Bari Centrale station twice a day, which you can recognize on the schedule as “frecce” (what the company calls their high-speed trains). Multiple regional trains run on an hourly basis, too, but these require a track change that tacks on additional hours.

High-speed trains require making a seat reservation in advance, which can be done when booking your ticket online or at the station. Regional trains do not need seat reservations.

While it's not the quickest way to get from Venice to Puglia, driving lets you explore many cities and regions of Italy that you wouldn't get to via plane or train. It helps that the drive is extremely straightforward, too. After exiting Venice, take A13 autostrada (a toll road) down to Bologna, then take A14 autostrada along the Adriatic coast for the duration of the drive. Stop at some of the coastal towns and cities like Pescara and Vasto or the country of San Marino, one of the world's smallest and most historic republics. In San Marino if you need a bite to eat, two great restaurants to consider are La Terrazza, and Ristorante Il Beccafico.

After entering Puglia, take the Foggia exit off of A14 autostrada and explore Foggia, also known as Granary of Italy. Keep traveling an hour down A14 autostrada to get to Bari, where you can stay before exploring the rest of Puglia by car or train. A few nearby destinations to have on your list are Taranto, Vieste, and Lecce.

Hiring a private transfer is an expensive but ideal option: you can drive through the countryside and stop at your leisure while not having to worry about navigating the roads and finding parking.