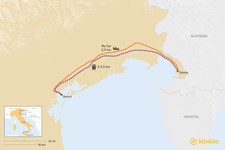 At just 100 miles (160 km) from Venice, the seafront city of Trieste makes an interesting add-on to any tour of northern Italy. And with its close proximity to the borders of Slovenia and Croatia, it's a convenient base for exploring parts of those countries as well.

Unless you plan to stop off at other cities and towns in northern Italy, taking the train is the most practical way to reach Trieste from Venice. From Venice Santa Lucia station, written on schedules as Venezia S. Lucia and the closest station to the main sights of Venice, Trenitalia trains depart for Trieste Centrale, that city's main station.

If you are already on the Venetian mainland, it makes sense to take a train from the Venezia Mestre station. Trains from Mestre to Trieste leave with the same frequency and take from 1 hour, 45 minutes to 2 hours, 45 minutes. Also from Mestre, high-speed Frecciarossa or Frecciabianca trains reach Trieste in a little more than 1 hour, 30 minutes.

From both stations, the difference in journey length depends on whether you choose a Regionale Veloce train or a Regionale, which makes more stops. Since there's little price difference between the two—and in some cases, the faster trains are actually cheaper, unless you like slow train rides with frequent stops, there's no incentive to take a slower train. Faster Freccia trains from Mestre cost a little bit more than the Regionale Veloce trains from either station.

Should you need to get to Trieste Airport from Venice, Trenitalia also offers direct trains from Venezia Santa Lucia or Mestre. Since the airport is about 20 miles northwest of Trieste—and closer to Venice—trains from either station arrive in about 1 hour, 30 minutes or less.

Hiring a private driver is a particularly comfortable option for getting between the two cities. For those interested in driving, note that Venice's Piazzale Roma is the only parking area in Venice and the only place to pick up a rental car. The drive to central Trieste takes about 2 hours, 20 minutes. If you're interested in making a few scenic stops, you can consider Treviso and Palmanova—the latter has a noteworthy walled city center in the form of a 9-point star.