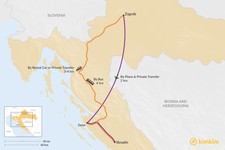 There are several ways to travel the 194 miles (312 km) from Croatia's capital, Zagreb, to Skradin. Book a flight and private transfer for stress-free and hands-off travel. A private transfer is easy and efficient for the whole trip or simply from Zadar airport, which is only an hour away (without traffic).

Bus travel is less comfortable and takes more time, but it remains an inexpensive option. Book an early travel departure, like the 6 am bus, for the shortest travel time.

For more trip ideas, consider this 15-day itinerary that explores the best of the nearby Dalmatian coast or plan a stop in Zadar for lunch and sightseeing.

Depending on the route, traffic conditions, and tolls, the trip from Zagreb to Skradin can take as little as three and a half hours. Travelers can choose from a couple of routes: a highway route through central Croatia and a route that skims the border with Bosnia and Herzegovina. Both routes eventually near Zadar, which is only an hour from Skradin.

The fastest route takes E65 and E71 through central Croatia, though there are three tolls. Carry enough kuna (local currency) to pay the tolls in both directions. An alternative highway route takes closer to four hours and relies on E71 and D1 from Zagreb. Though the second route is nine miles (15 km) shorter, it includes more tolls, causing it to be the slower option. Once far enough south and very close to Skradin, both routes take D56 into the city.

Hiring a driver is the most convenient option, but if you'd like to drive yourself, Zagreb has quite a few rental car companies that offer both manual and automatic vehicles. Know that automatic cars are more expensive to rent, and gas is bought by the liter in Croatia, so it tends to be expensive at roughly four liters per gallon.

Flying is by far the fastest and most convenient way to travel between Zagreb and Skradin. Nonstop flights from Zagreb to Zadar are only 45 minutes long. Once in Zadar, the drive to Skradin is only an hour by rental car or private transfer. Whether you choose to drive or book a transfer, the route relies on E71 and D56.

Though a less convenient option, there is a direct bus from Zagreb to Skradin that departs daily at 6 am. Later options take upwards of five hours and require a transfer in Zadar. If choosing to travel by bus in Croatia, expect delays due to traffic, accidents, or tolls.

Companies such as Flexibus provide a more comfortable trip. Most buses are outfitted with wifi, charging outlets, and a toilet. Expect at least one break during the drive and a minimal fee per suitcase.

Mljet is a popular island with visitors to Croatia and easy to get to...
Getting Around Croatia

Explore Croatia's top cities and cultural sights on this 10-day Best of...

Marianna S.
New York, United States
"Sarah and KimKim were great. Very organized, knowledgeable and highly respnsive. Sarah in partiuclar was a pleasure to deal with as I had a couple of last ..." read more
Traveled to Croatia solo in September, 2021
Plan your trip to Croatia
Customize your trip with help from a local travel specialist
Plan Your Trip