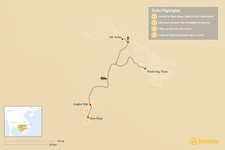 Discover the ancient ruins and delights of Angkor, just outside the bustling modern city of Siem Reap, on this 4-day trip to northern Cambodia. You'll hike and bike around Angkor's sacred sites, experience the nightlife of Siem Reap, and learn to cook and farm the Khmer way.

Arrive in Siem Reap, where you'll meet your guide at the airport. After a quick 20-minute drive to your hotel in town, take the evening to explore all this bustling city has to offer. Wander through the colorful night market, sample Cambodian cuisine from street vendors and local restaurants, indulge in a foot massage, or check out Siem Reap's funky art galleries. Ready for more? Explore a few of the local bars, or take on the lively nightlife of Pub Street and beyond

Discover Cambodia's majestic, UNESCO-protected ancient city of Angkor by bicycle. Built to simulate Mount Meru, the home of Hindu gods, Angkor was the capital of the medieval Khmer Empire and was once the largest city in the world. The sprawling stone complex is full of symmetry, intricate detail, and religious symbolism, and features hundreds of surviving temples and the remnants of a sophisticated canal system. The 21.7-mile (35 km) bike ride will take you through the jungle on dirt paths, encountering the magnificent temple ruins of Ta Prohm and Bayon. Cycle through the 1,000-year-old Victory Gate at Angkor Thom and continue on to the Terrace of the Elephants. Following lunch, explore the iconic Angkor Wat temple.

In the afternoon learn about the famous rodents at the Apopo Visitor Centre. Landmines left over from three decades of war are still a problem for farmers and local people in the Cambodian countryside. Whilst the use of humans with metal detectors and mine detecting dogs have made a major impact, there is still plenty to do. Following the success of using large ‘hero rats’ in Angola and Mozambique they have also been used in Cambodia since 2015. Not weighing enough to trigger a landmine when walked across, the rats are smart enough to smell the explosive and give a warning note to their handler. The mines can then be isolated and removed. At the Apopo Visitor Centre take a short tour to learn about their work with a short demonstration by a mine detecting ‘hero rat’.

This evening enjoy some modern Khmer theatre at the Cambodian Circus of professional artists performed by Phare Ponleu Selpak. More in the style of Cirque du Soleil than a traditional European circus, you'll be amazed by the show of modern Cambodian tales told through dance, acrobatics, aerial acts and music. The program originates from a project set up in refugee camps to encourage young people to express themselves through art. Today, the Phare circus is slowly becoming famous around the world and is a great example of a responsible tourism success story.

Plan your trip to Cambodia
Customize your trip with help from a local travel specialist.
Plan Your Trip

Day 3: Hike Mt. Kulen and Swim Under a Waterfall

This morning drive to Phnom Kulen, 48km from Siem Reap. ‘Phnom’ means mountain or hill in Khmer and this mountain is considered the most sacred of all in Cambodia. This is the place where Jayavarman II proclaimed himself King and led to the start of the Khmer empire. You'll start with some easy trekking up the mountain, visiting a local pagoda with a natural spring on the way up to the top. Be prepared to take in spectacular views as you make your way along this little known route. At Phnom Kulen stop to see stone carvings in the riverbed, visit a large reclining Buddha statue and take a rest or refreshing bath at a waterfall. We will take a picnic lunch box which you can enjoy near the river. After the hike, you'll return to Siem Reap, arriving late afternoon.

Day 4: Learn to Farm and Cook Like a Local

This morning it is time for you to try preparing some Khmer food with your own hands. After being picked up at your hotel, you'll make a stop at the Old Market in Siem Reap where the chef will show you different Cambodian vegetables, herbs, spices and other ingredients while explaining how they are used in traditional Cambodian cooking. After the market, you'll head a few kilometres outside of town to learn how to cook Cambodian cuisine at a micro-farm where you can enjoy picking your own fresh ingredients from the garden. The first step is a hands-on demonstration of how to make Khmer rice noodles. After preparing a four course meal with many of the ingredients you chose from the garden, you'll sit down to enjoy the ‘fruits of your labour’ before returning to town.

The afternoon is at leisure before heading to the airport for your departing flight.

Plan your trip to Cambodia

Plan your trip to Cambodia

Dig into the nature, history, and fascinating culture of Cambodia on...

This 15-day tour of Cambodia brings you to the wonders of Angkor, Phnom...

See Cambodia by bike, following a pilgrimage route from Angkor to the...

This journey through Indochina will walk you into the ancient Khmer city...

Make the Most of Your Time in Cambodia

How Many Days to Spend in Cambodia

Cambodia is a small country with a wealth of cultural attractions and...

To make the most of a five-day trip to Cambodia, it's best to focus on...

One week in Cambodia is enough time to explore Angkor or Phnom Penh,...

With 10 days to explore Cambodia, you can combine several distinct...

With two weeks in Cambodia, travelers have a wealth of options. Go on a...
Make the Most of Your Time in Cambodia

January is right in the middle of the cool, dry season in Cambodia, and...

February is in the middle of Cambodia's cool, dry season, but "cool" is...

March is the final month of the cooler, drier season in Cambodia....

Cambodia in April is shoulder season. Although it's still drier than at...

To avoid the crowds that flock to Cambodia's ancient city of Angkor,...
Cambodia Travel Advice

Kimkim has selected the best Cambodia travel agents so you'll have a...

How Many Days to Spend in Cambodia

Cambodia is a small country with a wealth of cultural attractions and...

This two-week itinerary covers the bases for a complete Cambodian...

You can experience every facet of Cambodia in two weeks, from exploring...

With two weeks in Cambodia, travelers have a wealth of options. Go on a...

Contribute to the betterment of Cambodian society on this feel-good...

A
Amir A.
Pennsylvania, United States
"I had an incredible time in Cambodia. I 100% recommend working with Steve (Travel Asia A la Carte). Each leg of the trip was well organized and accounted for..." read more
Traveled to Cambodia as a group in June, 2022

Carlos E.
New York, United States
"Cambodia was incredible. I took this trip with my long time friend and had pretty high expectations. With the help of KimKim and Steve, (our appointed local ..." read more
Traveled to Cambodia as a group in June, 2022

Richard S.
Connecticut, United States
"Pissa was the best guide and the insight and cultural history I learned from the inside was invaluable. High highly recommend KimKim and, if possible, a solo..." read more
Traveled to Cambodia solo in February, 2020

Terri M.
California, United States
"We had the most amazing experience in Laos and Cambodia thanks to Steve at KimKim travel. He planned everything exactly like we wanted. Luang Prabang was ..." read more
Traveled to Cambodia as a family in December, 2019