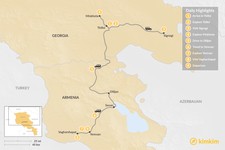 This 9-day itinerary hits Georgia and Armenia's cultural and historic highlights. Visit the multi-ethnic crossroads of Europe and Asia in Tbilisi, explore small-towns in Kakheti, and discover 6th-century Jvari Monastery. Cross the border into Armenia to see 10th-century Haghpat monastery, Sevan Lake, and a 2000-year old Mithran sun temple. End your trip with a visit to Yerevan's Republic Square and nearby Saint Hripsime Church—one of the country's oldest.

Welcome to Georgia! Your guide and driver will meet you in the arrivals hall and transfer you to your hotel. Check-in and enjoy some free time to relax, or head out to stretch your legs on the cobblestone streets of Tbilisi.

Head out to explore the city on foot, starting with the narrow streets and traditional houses of Old Tbilisi. Tbilisi is a truly multi-ethnic capital at the crossroads of Asia and Europe, and this is reflected in the local houses of worship—stop and see the Georgian Orthodox, Armenian Apostolic, and Latin Catholic churches, as well as the local synagogues and mosques. Visit the history museum and National Gallery to learn about Georgia's art and culture before returning to your hotel to relax for the night.

Start your morning by visiting Gremi, a 16th-century royal citadel, and the nearby Church of the Archangels. This architectural complex has survived from the once flourishing town of Gremi and is located southwest of the present-day village. From here continue to Signagi, a town in the Kakheti region and the administrative center of the Signagi Municipality. This small town is a popular tourist destination due to its location at the heart of Georgia's wine-growing region and is famous for its landscapes, pastel houses, and narrow cobblestone streets. Return to Tbilisi for the evening.

Plan your trip to Armenia
Customize your trip with help from a local travel specialist.
Plan Your Trip

In the morning depart for the 6th-century Jvari Monastery, then continue to Mtskheta, one of the oldest cities in Georgia. Stop and see the 11th-century Cathedral of Svetiskhoveli, which is considered to be one of the holiest places in Georgia since the mantle of Christ is buried at this location. Both monuments are UNESCO world heritage sites.

Day 5: Marvel at the frescoes of Akhtala

Drive to the Armenian border to your first stop of the day—the monastic complex of Haghpat, built in the 10th century.  The largest church in this complex, the Cathedral of Surb Nishan, was completed by King Smbat in 991. This monastery was a masterpiece of religious architecture and a major center for learning in the Middle Ages and is a UNESCO World Heritage List. Continue to another famous nearby complex, the 10th-century Akhtala, which is famous for the artistic frescoes which decorate the inside walls and bearings of the building. Finish your day with a drive to the town of Dilijan, in the Little Switzerland of Armenia.

Day 6: Soak in the views of Sevan - the blue pearl of Armenia

Head to Sevan Lake, the largest body of water in Armenia, to see the Sevanavank Monastery. Continue to the Temple of Garni, a monument of the Hellenistic period and an impressive piece of ancient Armenian architecture. The temple was likely built in the first century AD by the Armenian King Tiridates and is dedicated to Mithra, the god of the sun, whose figure is depicted at the back of the site. From here continue the drive to Yerevan, the capital of Armenia.

Yerevan is the capital and largest city in Armenia and sits on the Hrazdan River. Head out to see the city sights on a tour in the morning. Your stops will include the Republic Square, the Esplanade, and the Opera House. Visit the History Museum to learn about the history of the city and the founding fortress of Erebuni, built in 782 BCE. In the afternoon head to the Tsitsernakaberd Memorial Park and the museum for the victims of the Armenian Genocide of 1915.

Drive to the town of Vagharshapat, also known as Etchmiatsin, to visit the Saint Hripsime Church, one of the country's oldest. The structure you see today was completed in 618 CE and is known for its Armenian-style classical architecture. See the Etchmiatsin Cathedral, the head church of the Armenian Apostolic Church. The original church was built in the early fourth century by Armenia's patron saint Gregory the Illuminator, following the adoption of Christianity as a state religion by King Tiridates III. It replaced a pre-existing temple, symbolizing the conversion from paganism to Christianity. Return to Yerevan with a stop at the 7th-century ruins of Zvartnots Temple.

After breakfast at your hotel depart for the airport and your flight home.

Plan your trip to Armenia

Plan your trip to Armenia

Kimkim has selected the best Armenia travel agents so you'll have a...

This 9-day itinerary hits Georgia and Armenia's cultural and historic...

Explore the best of Armenia's ancient Christian landmarks and...

Spend eight days exploring the medieval history of Armenia with this...

Explore Armenia on this 9-day cultural and historic highlights...

Spend eight days exploring the medieval history of Armenia with this...

Explore the best of Armenia's ancient Christian landmarks and...

Explore Armenia on this 9-day cultural and historic highlights...

This 9-day itinerary hits Georgia and Armenia's cultural and historic...