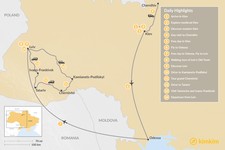 Discover the best of Central and Western Ukraine on this two-week adventure. Featuring a combination of popular sites and off-the-beaten-track destinations, you will begin in the capital of Kiev, fly to Odessa on the Black Sea, and end your stay in Lviv. You'll explore medieval castles, stroll along extravagant boulevards, and hike to hilltop fortresses, ensuring a fascinating trip through one of Europe’s hidden gems.

Welcome to Kiev! Upon your arrival, you will meet your driver and be transferred to your accommodation. Settle in, and depending on the time and your energy levels, go out and explore your surroundings.

Today you will delve into the lost world of the Kievan Rus, the "Mother of Russian Cities".  You'll begin with a morning visit to the newly built Kyivan Rus Park, an open-air reconstruction of part of medieval Kiev. Walk beside the massive wooden walls of the city and admire its historic buildings.

After lunch, you’ll see the city’s most popular attractions, starting with the Golden Gate, formerly the main entrance to the medieval city. From there you will visit the impressive Church of Holy Wisdom, dating from the 11th century, and then on to the Church of St. Andrew. You’ll also head up to the oldest part of the city to see where  Kiev originated.

This morning you will venture out to learn about Kiev’s more recent history with a visit to Maidan Kherschatyk (Independence Square) on Khreshchatyk Street to see the famous Maidan, Motherland Statue, and the Arch of Friendship.

After lunch, take the rest of the day to explore the city on your own.

Today you will travel the short distance to Chernihiv, one of Ukraine's oldest cities, for a look into its storied past. Many of its popular attractions date as far back as the 11th century and are considered to be masterful works of art. Begin in Chernihiv's Red Square for a look at the many cultural institutions. From there head southeast to Dytynets Park for encompassing views of Boldyna Hora, the gold cupolas of St. Catherine's Church (as well as a number of other equally impressive churches and cathedrals), and stop for a bite to eat at one of the park's restaurants offering traditional Ukraine cuisine.

Next, pass through the Boldyna Hora park and head to the caves of St. Anthony and explore four levels of underground passages leading to historic religious relics, before checking out the Trinity Monastery.

Return to your accommodation in Kiev.

Today is a free day to explore the city at your own pace. Visit one of the city's many parks, explore the bustling downtown, or discover any number of the striking cathedrals and churches throughout the city. For more on what life was like during the 16th and 19th centuries, head to the Pirohiv Open-Air Museum of Architecture and Life of Ukraine just outside the city limits. From there, visit charming Feofaniya Park for a little escape from the noise of Kiev, lovely to visit any time of year.

Head to the airport to take an early (and short) flight across the country to captivating Odessa along the coast of the Black Sea. Odessa was founded in 1794 by Catherine the Great of Russia and during the Soviet period, the city was likely the nation’s most important trading port. You’ll notice that the architecture is much more Mediterranean, reflecting the city’s Italian and French influence.

After settling into your hotel you will meet your guide to cover the city's highlights. Begin with a visit to one of the world's finest opera houses, the National Academic Theater of Opera and Ballet. Admire the neo-baroque exterior and all the intricate details that make up this fine building. From there, you'll walk to Odessa's central landmark, Monument to Catherine II in Katerynynska Square and along the impressive Primorsky Bulvar, a large boulevard that runs parallel to the sea and is bordered by grand buildings. Here you will find the iconic Potemkin Stairs that act as a formal entrance to the city from the direction of the sea.

Take today to discover more of what Odessa has on offer. Enjoy brunch in one of the many cafés on Derybasivska Street, visit any number of galleries or museums, like the interesting Museum of Smuggling for a little insight into Odessa's illegal trades history. A natural next stop would be to book yourself in with a tour of the Odessa Catacombs to explore some of the networks of tunnels that lie underneath the city. For an afternoon of leisure, head to Arcadia, just half an hour outside of the city to relax on the beach or for something closer, lie out on Lanzheron beach.

In the evening, you'll return to the airport for your flight across the country to Lviv.

After breakfast, you will join your walking tour to explore Lviv as well as learn about its illustrious past. Start your tour in Market Square (also knowns as Rynok Square) and note the architecture, traces of Polish and Austro-Hungarian influences can be spotted alongside faceless Soviet-era buildings and modern dwellings. Here you will explore Lviv's old medieval quarter that surrounds Market Square, before venturing to other key attractions, including a visit to the Lviv National Academic Opera and Ballet Theater. Built in the classical tradition with neo-renaissance details, the building acts as the city's calling card.

Day 9: Discover more of Lviv, from castles to casinos

Today you will climb the High Castle Hill for the best views overlooking the city. Where a castle once stood 400 years ago to protect the citizens of Lviv, all that remains today are its ruins. Next, you will check out the ornate and luxurious House of Scientists, formerly called the Austrian Casino, that acted as a meeting place for the aristocratic elite. From there, You will visit St. George's Cathedral, which serves as a great example of rococo architecture and was built between 1744-1760.

This morning you will drive nearly five hours south to Kamianets-Podilskyi, stopping along the way in Ternopil to break up the drive.

Upon arrival, check into your hotel before joining your walking tour around Kamianets-Podilskyi's impressively preserved Old Town and the medieval Kamianets-Podilskyi Castle. Delight in the well preserved historic buildings set amid picturesque environs of the Podilski Tovtry National Park. Find a restaurant in Old Town for a bite to eat, before continuing your journey to the park's edge in Khotyn (45 minutes). Stretch your legs and explore the 13th-century Khotyn fortress and its grounds offering photo opportunities wherever you turn.

Today you will drive further southwest to one of Western Ukraine's main cultural centers, Chernivtsi. Home to more bookshops than bars, get lost amid the stunning buildings, many of them influenced by the Viennese style giving rise to one of the city's nicknames, "Little Vienna." Make your way to Chernivtsi City Hall and climb its tower for panoramic views over the city. From there explore the city center stopping in at the Museum of Arts, before checking out the twisted towers of the St. Nicholas Cathedral. Stroll along the pedestrianized Olha Kobylyahska Street and stop in at a cozy café before making your way to the grand architectural treat of Chernivtsi National University.

This morning you'll drive further west to Tatariv. Check into your accommodation and ready yourself for an all-day hike in the Carpathian National Nature Park. Historically inhabited by the Hutsuls, the park contains a number of historical monuments and architectural points of interest, including traditional mountain villages and wooden buildings. You will visit the Hutsul Museum of everyday life for detailed insight into how this ethnic group lives. And upon your return to Tatariv, you will stop in Vyshyvanka to learn about Ukranian traditions, including the significance of Ukranian embroidery.

After breakfast and check out, transfer the short distance to Yaremche, a jewel of the Carpathians. Along the way you will stop at the Prioby Waterfalls, its thunderous sound has been compared to that of Niagara Falls. Spend some time exploring the nearby market and take advantage of the fair prices on handcrafted items, perfect for souvenirs and gifts. Continue to Ivano-Frankivsk (just over an hour) and stop for lunch in a family-run restaurant-museum, before enjoying a walking tour of the city itself.

In the late afternoon, you will return to Lviv.

Depending on your departure details you may wish you spend some time shopping for last-minute souvenirs in Lviv's Old Town before heading to the airport for your return flight home.

Plan your trip to Ukraine

Plan your trip to Ukraine

This 16-day itinerary introduces you to one of Europe’s least...

Discover the best of Central and Western Ukraine on this two-week...

Explore one of Eastern Europe's oldest cities on this three-day...

Explore the culture and history of Ukraine on this seven-day,...
Ukraine Tours & Itineraries

Kimkim has selected the best Ukraine travel agents so you'll have a...

On this three-day, self-guided tour of Odesa, you can explore the major...

On this three-day, self-guided tour of Lviv, you will explore the local...

On this nine-day, self-guided tour of Ukraine, you will visit three...

Explore the culture and history of Ukraine on this seven-day,...

On this seven-day, self-guided tour from Kyiv to Odesa, you will explore...

Peter H.
New Zealand
"Our 10 day trip to Ukraine, including Kyiv, Chernobyl and Lviv, was fantastic. Sean and Ulyana set up the trip exactly how we asked them to, and provided p..." read more
Traveled to Ukraine as a couple in August, 2019
J
Joseph R.
Idaho, United States
"This was an amazing trip and it was entirely thanks to the team at Ukraine Culture Trip! Lena, Natalia, Rowan, Julia (Lviv), Alex, Iliana (I think that was h..." read more
Traveled to Ukraine as a family in June, 2019

Barbara D.
Canada
"Sean couldn’t have done anything more to make Our trip to the Ukraine more memorable, from the moment we stepped off the plane in Odessa to the moment we sai..." read more
Traveled to Ukraine as a couple in August, 2018

Natalie M.
Florida, United States
"The portion of my trip to western Ukraine was the best. The driver Yuri was extremely friendly and his company was able to plan our itinerary so we got to se..." read more
Traveled to Ukraine as a couple in July, 2018
Plan your trip to Ukraine
Customize your trip with help from a local travel specialist
Plan Your Trip