Explore 10 trips designed by local kimkim specialists to get ideas for your trip to Chile.

Eight days is not only enough time for excursions to some of Chile’s most breathtaking regions, but you can experience it’s most ancient cultures, too. First you could plan a combined cycling/hiking outing around the Atacama Desert in the far north. On foot you’ll visit geysers, salt flats, volcanoes, and more, just like the region’s ancient Altiplano people. Another option is to travel to far-flung Easter Island, where the giant stone Moai, built by the earliest islanders, still stand guard. For some snowy adventure, you can ski/snowboard in the Andes resort of Portillo, near Santiago, or take a relaxing wine tour of the fertile Casablanca and Maipo valleys.

See our itineraries below or read our guide to the best 8-day trips in Chile.

Plan your trip to Chile
Chat with a local specialist who can help organize your trip.
Get Started 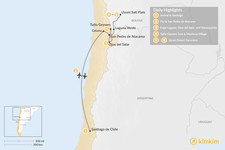 This seven-day itinerary affords just enough time to take part in one of the most epic journeys in South America: the multi-day 4x4 adventure from San Pedro de Atacama, in northern Chile, to the town of Uyuni, in southern Bolivia. Your journey starts in the town of San Pedro, an ancient desert outpost in Chile's northern Altiplano (high plateau) region. You'll take a tour of the lagoons around the Atacama Desert, and then you'll embark on the four-day journey to Uyuni. Along the way, you'll be awestruck by the seemingly endless salt flats, towering volcanoes, and painted mountains. You'll even overnight in a guesthouse made out of salt!

This itinerary is ideal for those travelers looking to discover Chile's natural beauty and culinary heritage. Start in Chile's wine region with excursions to both the Maipo and Casablanca Valleys. Here, you'll learn all about Chilean wine while enjoying the scenery and delicious pairings. Next, experience the coastal cities of Valparaíso and Viña del Mar before traveling south to the Lake District, where central Chile meets Patagonia.

Immerse yourself in the unique landscapes and culture of Chile. Start your journey in Santiago and head to the Casablanca Valley to indulge in Chilean wine before traveling to the coastal city of Valparaíso to discover its beautiful murals and artsy vibe. Then, get an up-close look at a 150,000-strong penguin colony before heading to the famed Torres del Paine National Park to experience some of the best hiking trails and landscapes the region has to offer.

To the Chileans, it's Isla de Pascua, and indigenous residents call it Rapa Nui—but the rest of the world knows it by its most famous nickname: Easter Island. This Chilean territory, formed of volcanic rock, is 2.5-million years old, and on this adventure, you'll get to explore its major archeological sites. Next, venture to Patagonia to experience the rugged beauty of Torres del Paine National Park. 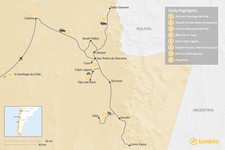 This journey in the Atacama desert takes you to some of the most spectacular desert scenery on the planet. You’ll see sputtering geysers, salt flats where flamingoes roam, and gorgeous sunsets over otherworldly rock formations. This Chilean adventure is for active-minded travelers, with biking and hiking among astonishing Andean landscapes.

This eight-day Chilean adventure begins in the capital, Santiago. Explore the city and surrounding region, including the neighboring cities of Viña del Mar and Valparaíso. Next, hop a flight to Easter Island. This Chilean territory, formed of volcanic rock, is 2.5-million years old. As you tour this ancient, Polynesian destination, explore the many moai figures, along with beaches, volcanoes, and significant archaeological sites.

This itinerary allows you to experience the major cities and wine regions of central Chile as well as the arid desert landscapes in the country's north. First, you'll arrive in Santiago and take a city tour before discovering the nearby wilderness and wine country. Then it's a trip to the coastal seaport and UNESCO World Heritage Site of Valparaiso. Afterward, you'll jet off to the Atacama Desert in the north, where you'll visit the indigenous villages, geysers, painted mountains, salt flats, and lunar landscapes for which the region is deservedly famous.

Begin your adventure in the capital of Santiago. Experience the city's culture and culinary delights on a full-day walking tour. Next, head to the coast to immerse yourself in the artsy vibe of Valparaíso before heading out to the Casablanca Valley to taste some of Chile's world-renowned wines. Then, travel south to Punta Arenas to explore the rugged beauty and unforgettable landscapes of Chilean Patagonia. Take a boat out to Magdalena Island, and get a close-up look at the 150,000 strong penguin colony. Then you'll embark on a trek into the famed Torres del Paine National Park, a Patagonian Mecca for hikers. Finally, you'll tour lakes and rivers before finishing with a boat trip to Glacier Grey.

Have an alternative honeymoon with this biking and hiking adventure trip through gorgeous Chile. Arrive at Santiago, Chile's lively and eclectic capital before beginning a bike tour through the vineyards of Casablanca. Alternate physical activity with wine tours as you cross this region's magnificent landscapes. Then, you'll change it up by traveling to the Atacama Desert. One of the driest places on earth, this desert presents challenges and beauty in equal parts, and is perfect for hiking.

Begin your adventure in Santiago, and explore the colorful city of Valparaiso, and take in the sights and sounds of the modern metropolis. Next, head to the coast for a tour of the colorful city of Valparaiso accompanied by wine tasting in the Casablanca Valley. Then, Head out to the mountains to hit the slopes at the world-renowned Portillo Ski Resort. Spend several days testing your skills on the slopes, followed by evenings of relaxing at the spa or dining at the resort's fine restaurants.