Our trip to Iceland coincided with our 35th wedding anniversary and my two month recovery from hip replacement surgery. We had a slightly rocky start as the ride from the airport didn't drop us off at the hotel but instead at the bus depot, a 20 dollar ride to the hotel. Because it was a special time for us I booked the Icelandair Reykjavik Marina hotel for 4 nights so we could enjoy the city and its sights and cuisine. The hotel was fantastic and perfectly located. The room I booked came with a social hour that included free wine and beer and snacks which took a little of the edge off of the expense of Iceland. I hired the kimkim team to plan the next 4 days and they came through with a spectacular agenda in the Golden Circle and the South of Iceland. They arranged for the rental car, three hotels, and forwarded the agenda which included google map directions, vouchers for a zodiac boat tour of the ice lagoon, and an ice cave exploration. We were picked up in the morning to get the car. The car came with a wifi hot spot and a garmin nav device. Driving in Iceland is easy once you get the feel of the two lanes roads that become one lane over bridges. Our mapquest instructions broadcast through the radio and were perfect during our first days exploring through the glorious, sometimes strange landscape. Waterfalls and photo ops every few feet it seemed. We drove approximately 235 km on the Golden Circle and stopped at Thingvellir National Park, got drenched by an active Geyser but recovered with a mug of spectacular lamb soup, saw the magnificent Gullfoss waterfall. We ended our day at the Hotel Ranga. This was another beautiful hotel with rustic charm and amazing views, including one of the most productive Salmon rivers in Iceland right in their back yard. We continued on around the Island towards the east coast with more astonishing landscapes but at this point our mapquest couldn't find a network. Fortunately we had printed the itineraries and had the Garmin navigation device so we were ok. We visited black lava beaches, looked at seals and took photo's of icebergs on the beach before donning our survival suits and flotation devices for a zodiac ride on the lagoon. We were up close to a glacier that represents one 6th of the landmass of Iceland. The day was really wonderful but we were ready for a quiet night in our next Hotel, the Fosshotel Nupar. This was a bit of a disappointment as it was a little old and tired looking but since we booked late there were no better accommodations to be found. We were there for 2 nights. It did have a nice bar lounge that played some really great music. I should mention that all the hotels kimkim booked for us came with a full breakfast which again helped the budget from bleeding too much. The last day took us through the charming town of Vik with its lovely red and white church standing over the town and from which one had spectacular views of the ocean and the surrounding landscape. We drove through miles of lava fields, the largest in human history, that was other worldly! We took our time, visited the Bridge between the continents where the Euroasian and the American tectonic plates meet. I had to cancel the ice cave adventure as it involved some climbing which my new hip just wouldn't allow. Kimkim were gracious enough to refund that portion of the trip and we were very grateful. It gave us a little more time to drive to the most geothermal area of Iceland and feel the heat! We also at some point went to a waterfall that had a rainbow in front of it for hours and one that we walked behind. Our last night was at the Hotel Berg near the airport for our return flight the next day. Iceland is one extraordinarily beautiful country and we picked what must have been be nicest 8 days in the year. It was sunny every day with only one having a mild rain squall. Unfortunately it was cloudy at night so the only time we saw the Northern lights was on the plane as we approached Iceland. Just an excuse to return. So thank you Preeti, our kimkim travel coordinator, and her colleagues, and kimkim itself for helping us make memories. 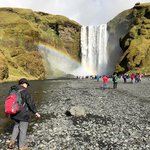 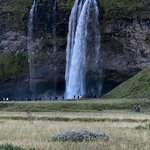 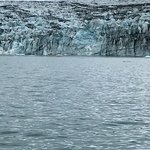 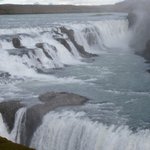 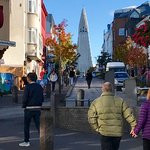 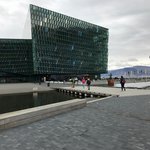 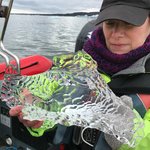 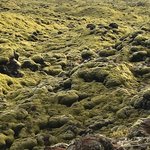 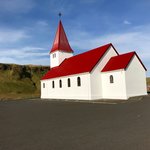 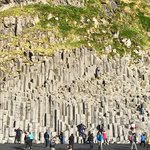 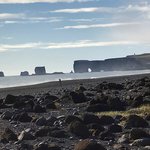 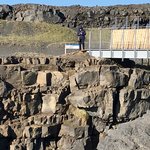 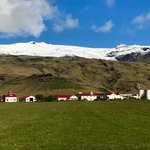 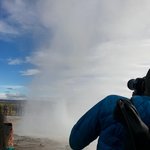 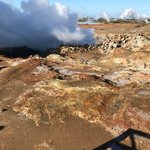 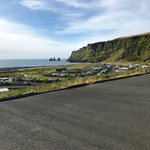 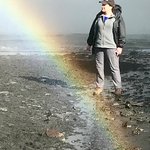 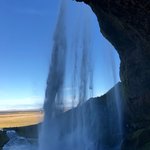 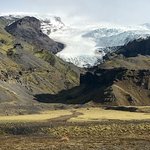 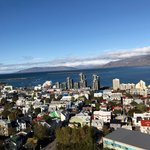