Been there. Done that. Have the t-shirt to prove it.

That’s usually what people say when they have travelled to a place, or have completed a task.

Well two out of three ain’t bad, especially since buying t-shirts is not part of my aesthetic. LOL!

Instead, I’ll sit grinning madly with memories of the “been-there-done-that” when I flip through my passport, my gmail account or my phone photos.

Jordan was amazing. The people are amazing. The food is incredible. The history is epochtic. The landscape is jawdropping.

Ahmad was waiting to pick me up at the airport and from the-get proved to be the best companion for this five day trip that I could ever ask for. He was my driver, my dj, my translator, my dance partner, my diary, my sidekick, my smilemirror, my protector, my lunch partner, my tea connoisseur, my phototakeouter and the best tourguide that I’ve ever had on any of my travels.

On our many roads to cross journey, I was introduced to songs that I had never heard before! Music, dancing and laughter was our modus operandi. He even played an Arabic song that would become the songtrack of my trip – so much so that I made him stop the car so that I could get out and dance barefooted in the desert. I wish I remembered it now. He told me the name but I forgot. Needless to say I had F.U.N!

I loved visiting Jordan. I loved it. It helped that I was riding a wave of happy. The visit to Jordan was the culmination of my one-a-year odyssey that I started in 2012, visiting one of the New Seven Wonders of the World every year. Jordan was the one that happened last and may arguably be the best visit for several personal reasons.

Considering its location, the country is pretty peaceful but mostly known for the ancient Nabataean city of Petra which was carved out of rock over 2000 years ago and is one of the Seven Wonders of the World.

The city is carved out of these massive towering boulders that occupy several complexes. There is one gate in and one gate out but you rarely ever repeat your steps; often every cornerturn yields a new and magnificent site. Its dramatic and astounding and the walls echo a remarkable history.

After you enter through the gate, you walk through what is called a Siq which highlights the way in which water was harvested and channeled throughout the city, the Siq opens you up to this massive monument called the Treasury. I got there at 7am, it was kinda cold, not many tourists were around, so I got to poke around, peep in, explore at leisure and have not too many people in my pictures. A few hours later, the place was crawling with tourists.

Then I took a different route to climb to the top of an adjacent mountain to see the Treasury from the top. After I dismounted one mountain, I began an epic journey of climbing 1000 steps to view the Monastery – the largest of Petra’s carved structures and an amazing monstrosity of a building. The symmetry of the structure built at a time when engineering was not what it is today, is a sight to behold and the views from on top of the mountain of the surrounding landscape were nothing short of amazing.

As I was making my way off of the mountain, possibly at the last one hundred steps, the sky got dark and it started to rain. I had my umbrella, so the torrential rain was hardly a challenge, but I got to see first-hand how the water is channeled through the gorges of Petra, and how the engineering actually worked. That in itself was an amazing sight. After a couple of minutes though, the water grew fierce. The guides started shouting “save yourself, run for your lives” as the water started swiftly collecting and gushing through the Siq. Not exactly what you want to hear on your travels! The Treasury was opened and tourists piled in as its higher ground provided security and shelter. Needless to say, no one died, the tourism authority trucked the tourists who were stuck far into Petra out. I walked out, but my sneakers never made the journey back. I lost them to Petra.

I called Ahmad to pick me up, I got home and changed and got to Petra Kitchen just in time for my culinary dinner tutorial on the food and delicacies of Jordan, myself and about 20 other persons cooked five courses and sat and ate them all. By the time I got home, I was spent but completely satisfied.

Over the next few days, I toured the enchanting desert landscape of Wadi Rum, where I camped out one night under the desert moon listening to a very silent night. I also visited little Petra, Shobak, the Dead Sea, Mt Nebo and Madaba. When I left Jordan, I felt such a connection with its people who at the drop, were less interested in me buying their wares, and were more intrigued to invite me for copious amounts of fragrant tea, have me sit with them as they tried to figure out from whence I came and laugh uproariously at their confusion of what the Caribbean is.

Jordan is a country of settlers and refugees in that many persons moved there from neighbouring states; and were forced to forge an identity out of a new landscape – possibly one of every three persons hail from a neighbouring country. Quite similar to what the Caribbean represents – it is a place that people make their own. I felt awed by the landscape which since biblical times had held such importance to the region and I felt moved by the culmination of my own insatiable desire to see the world as the world sees itself.

Oh, the joy of travel.

A friend recently reminded me of a response that I had given to the question of my travels, where is my favourite place in the world, and my response to him, is that I haven’t been there yet! That’s so me!

Now that the seven wonders are done, I need to see more. I need to travel even more. There is so much more to discover and so I wonder and I wander and I can’t wait to see where my wanderings take me to next! 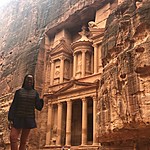 Hi Tamara, thank you so much for your review! I'm very very happy to hear that you enjoyed Jordan so much, and the time with Ahmad! :) Greetings and happy future travels!