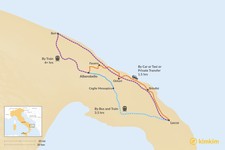 Alberobello and Lecce are just 67 miles apart, and the fastest ways to get from between them are to drive yourself, hire a private driver, or take a train from Alberobello to Bari and from Bari to Lecce. Alberobello, known for its iconic trulli, has limited bus and train service. Driving from Alberobello to Lecce involves navigating narrow streets in the towns between the two cities.

If you drive yourself or hire a private driver, consider stopping in Locorotondo, famous for its local wines; Ostuni, a lovely whitewashed hill town with winding alleys and fantastic views; or Martina Franca, which hosts the Festival della Valle d'Itria, an opera festival that runs from mid-July to early August.

Driving from Alberobello to Lecce gives you the freedom to explore the Puglian countryside. The drive should take about one and one-half hours without stops. Be sure to bring a good wayfinding app, GPS, or map, as finding your way through the towns along the route can be confusing, even if you follow directional signs to Brindisi and Lecce.

There is a Zona a Traffico Limitato (Limited Traffic Zone, or ZTL) in Lecce's historic center. You may not drive in the ZTL during evening and overnight hours, on Sundays, or on holidays unless your car is on the city's approved list (for example, if you are staying at a hotel in the ZTL and the manager gives you permission to park).

There are several different driving routes from Alberobello to Lecce. The fastest takes you from Alberobello to Fasano via Strada Provinciale 113 (SP113). Connect to SS379/E55 outside Fasano. From there, travel to Brindisi and south to Lecce's historic center. Without traffic, this trip should take about one hour and twenty minutes.

For a more scenic journey, drive to Brindisi via Locorotondo and Ostuni, eventually connecting to SS379 and continuing as described above. Stop in Locorotondo to try local wines, then continue on to Ostuni, where you can wander tiny alleys or walk along the walls and look out at the Adriatic Sea. Osteria del Tempo Perso is a unique spot to stop for lunch in Ostuni. Traveling to Lecce on this route will take you about one and one-half hours without traffic or stops.

Traveling from Alberobello to Lecce by taxi or private transfer gives you the speed and freedom of car travel without the worries. You can relax and enjoy the trip while your driver steers you toward your destination.

By Bus and Train

If you would rather save time than travel from Alberobello to Lecce entirely by train, you can take a Ferrovie Sud-Est bus from Alberobello to Fasano, Monopoli, or Ceglie Messapico and connect to a Lecce-bound train. This will save you about half an hour. Look carefully at the bus and train schedules before you buy your ticket, especially if you plan to travel on a Sunday. Be sure to validate your bus and train tickets as you board your bus and before you leave the train station.

Traveling from Portofino to Pisa means a trip down the coast of the...
Getting Around Italy

If thirteen days exploring the sunny Puglia region seems like a lucky...

N
Nancy D.
Missouri, United States
"KimKim did a fabulous job for my sister and me on our Italian Lake Country trip. They arranged everything within the price range we gave them and were with ..." read more
Traveled to Italy as a family in May, 2022

Margaret L.
Canada
"Our vacation in Italy was well beyond our expectations. All of our requests were met and the guides were very knowledgeable, friendly and professional. Eve..." read more
Traveled to Italy as a couple in April, 2022

Terrence H.
California, United States
"Okay, this was the most amazing trip I have had in my entire lifetime. From the transportations to and from the airports and train stations to the fantastic ..." read more
Traveled to Italy as a couple in April, 2022

Donicastiles@Gmail.Com S.
California, United States
"My husband and I finally got to have our Italian honeymoon (2 years delayed thanks to Covid). Over 2 weeks we experienced Venice, Florence, Rome, Pompeii, Ra..." read more
Traveled to Italy as a couple in April, 2022
Plan your trip to Italy
Customize your trip with help from a local travel specialist
Plan Your Trip