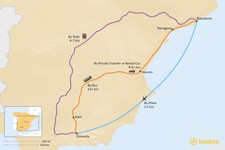 The distance between the capital of Spain's Catalonia region, Barcelona, and the Andalusian city of Granada, is 424 miles (682 km). The fastest way to make the trip is by direct flight, which takes about 1 hour and 30 minutes (airtime).

The train is another great option, though nothing will be nearly as quick as the flight. The train trip will take around 6.5 hours.

Driving yourself in a rental car is also possible, but takes a bit longer than the train (8 hours and 20 minutes). For a more luxurious option, private car services are available but pricey. Buses are another economic option, but the travel time is over 13 hours.

By far the most logical and efficient option is to fly from Barcelona's airport El Prat (BCN) nonstop to Federico García Lorca Airport (GRX) in Granada. Vueling Airlines runs multiple direct flights daily at a competitive cost, especially if tickets are booked at least a month in advance. While there are multiple nonstop flights daily, Iberia also runs many trips with a layover in the country's capital, Madrid.

Keep in mind that El Prat airport is located about 10 miles from Barcelona's city center, and heavy traffic is common. When you land in GRX it will take about 20 minutes by taxi to get to downtown Granada.

Another convenient option is to take the high-speed AVE train from Barcelona's main train station, Barcelona-Sants, to Granada's train station located one mile from the city’s main square, Plaza Nueva. There are four trips daily, but trains do fill up, so booking in advance is advised. Only one journey daily is direct, while the other three include a transfer in Madrid. The nonstop train departs at 6:50 a.m., though schedules change seasonally.

AVE trains, run by Renfe, are comfortable and offer air conditioning, a bar-buffet car, and power outlets. Three tiers of tickets are available including turista (standard), turista plus (comfort), and preferente (premier). Turista plus customers enjoy a spacious reclining seat, while the preferente selection offers food service at your seat and access to business lounges at select stations. Not all tiers are available on every train, so if you want a particular class you should book ahead of time through Renfe’s website to make sure it is available.

Having a car gives you the freedom to explore the route between Barcelona and Grenada, and perhaps take a few side trips along the way. This journey takes you nearly the entire length of the country, so is a good way to see Spain's diverse landscape.

The fastest route brings you south along the coast on the E-15 highway before cutting west. Before you turn away from the coast, consider a stop in Valencia. This stop only adds 20 minutes, and will allow you to take in sites like the futuristic City of Arts and Sciences or the city's impressive aquarium, L'Oceanogràfic. Plus, this stop will be just about half way through your journey.

If you're trying to see as much of the country as possible, heading west to Madrid and then straight south from there only adds 2 hours and will allow you to visit the country's capital. Madrid is home to countless gems like the Puerta del Sol, one of the most historic and expansive plazas in the city, the Fountain of Cibeles, and the Barrio Las Letras, the city's famous literary neighborhood.

If you opt for either of these pit-stops, make sure to check out kimkim’s 9 Day Itinerary in Barcelona, Valenica, and Madrid.

Alternately, for a more luxurious transport, hire a private transfer. With a variety of car services available online from mini-buses to luxury cars, prices are variable. You can request unique scenic stops along the way, such as the ancient ruins in the seaside city of Tarragona or Jaen, the country's olive oil epicenter.

The company ALSA runs 4 bus trips daily, which feature multiple stops in Barcelona including El Prat airport, Barcelona-Sants, and the Estación Nord bus station. The entire trip takes at least 13 hours, not including traffic. While the bus is an economical choice, the train costs a similar price (especially when booked in advance) and takes about half of the time.