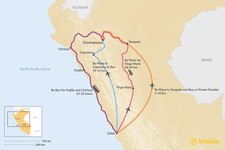 Chachapoyas is deservedly one of the top traveler destinations in the north of Peru, surrounded by beautiful cloud forest which secretes wonderful waterfalls and archaeological sights, such as the ruins of Kuélap. Chachapoyas is quite far from Lima and does not have its own airport. As such, there is more than one obvious way to get from Lima to Chachapoyas, whether you combine air and overland travel, or opt to go by road alone.

You'll make the necessary transfers between transport hubs within the cities of Tarapoto and Cajamarca by taxi or mototaxi (3-wheeled taxi). Find out more about visiting Chachapoyas with this 9-day itinerary.

By Plane to Jaén, Private Transfer and Bus

This is the newest and fastest option for travel between Lima and Chachapoyas, created to facilitate quicker travel to Kuélap. Latam run two daily flights, one in early morning and one in the afternoon, to Jaén. Travel time is 1.5 hours. From here you can catch a private transfer to Bagua Grande (1 hour) and then a bus from Bagua Grande to Chachapoyas (about 2.5 hours).

By Plane to Tarapoto and Bus or Private Transfer

Flying is certainly the quickest way of reaching Chachapoyas from Lima, but it is less straightforward than it is to many destinations because Chachapoyas does not have its own functioning airport. The closest airport with flights from Lima is in Cajamarca, but the airport in Tarapoto (230 miles or 370km) is connected by a better and quicker road to Chachapoyas.

Flights to Tarapoto's Cadete FAP Guillermo del Castillo Paredes Airport take about 1.25 hours and are at least every two hours between 7 am and 8 pm. Still, because of the distance the airport in Tarapoto is from Chachapoyas, and because of the remoteness of the road, it is recommended to get a bus from Tarapoto. The location buses depart from is in central Tarapoto 30 minutes' drive from the airport. Buses then take around seven hours via Hwy 5N to Chachapoyas.

By Plane to Cajamarca and Bus or Private Transfer

There are advantages to doing this route by private transfer too: namely, the beauty of the route. The twisting road through the Andes then down into the cloud forest is special. Overnighting options for this 8.5-hour drive include Celendín.

By Bus Via Trujillo and Chiclayo

This is the quickest route overland from Lima to Chachapoyas. You are, however, covering over a third of the country on a journey like this, so it is not to be undertaken lightly. Buses run north from Lima on the Hwy Pan-Americana Norte, one of Peru's best roads. After eight to nine hours they reach Trujillo, where you may have to change for the three to four-hour journey further to Chiclayo. In Chiclayo, you will need to change for the ten-hour trip to Chachapoyas via Hwys 4B and 5N. Recommended points to break the journey include Trujillo and Chiclayo, both vibrant destinations in their own right.

You could technically take a plane to Trujillo to cut six hours off the first part of this journey—but if you are going to fly, there are closer airports to Chachapoyas and you would need to make a long overland journey afterwards regardless.

By Plane or Bus via Tingo María, Tocache, and Tarapoto

This is the most adventurous of the four means of getting between Lima and Chachapoyas, which is saying a lot, as all have adventurous aspects!

Instead of taking the coastal route, this goes through the Central Andes. First, it's a 45-minute once-daily flight with Star Peru or a 12-hour bus ride to Tingo María, a relaxed city surrounded by waterfalls in the Andean foothills. This part of the journey can be broken if done by road at Cerro de Pasco (a mining town at very high altitude) or at Huánuco, an Andean city renowned for its agreeable climate. Colectivos then make the long run via Tocache to Tarapoto (ten hours). In Tarapoto, you can pick up a bus or colectivo to Chachapoyas (another seven hours).

Note that the Tingo María-Tarapoto stretch of the journey is not without its dangers—this is a major cocaine-producing area, for example—and the journey should be done in one go if possible.

Explore the essential highlights of Peru, including visits to Cusco,...

Julia M.
Connecticut, United States
"What a trip to Peru! It was an incredible family holiday. Even more so for not having done an adventurous trip before like this with our children (16, 14 and..." read more
Traveled to Peru as a family in August, 2022

Kenneth G.
"My wife and I took our two children (aged 11) for a month-long trip to Peru. Fortunately, I stopped trying to do things on my own and called kimkim who conn..." read more
Traveled to Peru as a family in May, 2022
R
Richard W.
California, United States
"We loved our Peru trip! From start to finish, Kristy went above and beyond in helping us plan it and in helping us resolve any issues that came up. Kristy w..." read more
Traveled to Peru as a family in July, 2022
Plan your trip to Peru
Customize your trip with help from a local travel specialist
Plan Your Trip