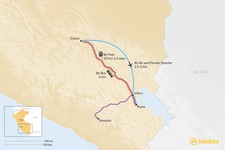 The so-called 'Gringo Route' around Peru runs from Lima to Cusco, and then on from Cusco to Lake Titicaca. The route is extremely popular with travelers, who come to South America's sparkling largest lake for forays out to some of its tradition-rich islands. Lake Titicaca's key access point is the lakeside city of Puno, where all transport from Cusco initially arrives. From Puno, boats ferry travelers to islands in the lake.

Because Puno does not have its own airport (the nearest airport is in Juliaca, over an hour's drive away) traveling from Cusco to Puno by plane is not as popular as it would otherwise be. But, unusually for an internal flight in Peru, this is actually not the most expensive way of arriving—even with a taxi from the Juliaca airport to central Puno it can work out as half the price of taking the train (see below for this option).

Latam has 1-2 direct flights daily, whilst Viva Air additionally fly there three times weekly: on Wednesdays, Fridays, and Saturdays. Flights depart from Cusco's Alejandro Velasco Astete airport and fly to Juliaca's Inca Manco Capac Airport. From here, it is on average one hour and 15 minutes journey time by private transfer to Puno, with services taking you direct to your hotel in Puno.

With the dramatic increase of train prices over recent years, and the long waits at the airports in Cusco and Juliaca, the bus has become the most popular option for travel on this route. It is also the cheapest and second-quickest means of travel. That said, it does not quite have the wow factor of the train ride or the convenience of a flight. Cruz del Sur and Ormeño run luxury services, but better still is the Inka Express service (taking slightly longer) which includes lunch and a tour guide explaining points of interest along the way. Hwy 3S runs southeast all the way from Cusco via Juliaca to Puno, and is the route that buses travel.

One of the best train journeys in Peru—and indeed, all of South America—runs from Cusco to Puno. The same train also makes stops at Juliaca and, once per week, Arequipa. The train run by Peru Rail departs Cusco's Huanchac station: The quickest service departs on Wednesday, Friday, and Sunday mornings and arrives the same evening; the Andean Explorer train (more luxurious) departs once weekly on Tuesdays but takes until the following day to arrive. Either way, the journey over the Andes is stark and stunning, but prices are high. This is the most expensive and atmospheric way to travel between Cusco and Puno.

Rainbow Mountain, a multi-colored ridge that is part of the greater...

This seven-day journey highlights all of the iconic landscapes, famous...

From the remote Machu Picchu ruins to the lush Amazon rainforest, this...

Explore southern Peru on this multi-day itinerary, passing through some...

Experience the best Peru has to offer in just over two weeks with this...