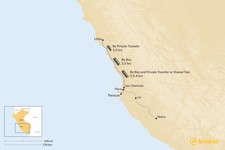 Travel from Lima to Paracas is a transition from one of South America's biggest cities to one of its nearest major wildlife reserves. Paracas is the catch-all word for the Paracas National Reserve and the nearby village (where transport from Lima arrives) which is also known as El Chaco. Going by private transfer all the way from Lima to Paracas (260 miles; 418 km) is the quickest and most enjoyable way to travel this route. Bus options (or a combination of bus and private transfer) are also available.

Paracas is close enough to Lima to make a day trip (with an early start) or weekend trip via the Pan-Americana Sur. This increases the appeal of going by private transfer, a much more enjoyable option than going by bus that allows travelers to see the interesting desert scenery. Generally, the best idea is to hire a car and driver from Lima for one day (for Paracas only) or two days (perhaps with a visit to Ica or the Nazca Lines included too). As sights at Paracas are spread-out, having a private vehicle here obviously enables you to see much more in a more relaxing way.

Some buses do run from Lima to Paracas (El Chaco) direct. These include luxury operator Cruz del Sur, with 11 departures from early morning through to early afternoon from its Javier Prado terminal in Lima en route to end destinations of either Ica or Nazca. There are other direct buses too, with overall departures from Lima at least hourly (albeit from different terminals in Lima depending on the operator). This is the most popular option, and saves a frustrating delay waiting for onward transport in Pisco.

By Bus and Private Transfer or Shared Taxi

Buses heading south to any destination on the Pan-Americana Sur will stop near Pisco, 3 hours south of Lima. However, as Pisco is slightly off the main road south, only buses marked 'Pisco' will actually be going to central Pisco. Buses going to Nazca and other destinations further south will stop at San Clemente. From here, regular taxis take passengers to central Pisco (10 minutes) from where you can get another regular taxi to Paracas (30 minutes).

This option is not significantly cheaper than going by direct bus, but it does mean you will get at least as far as San Clemente quicker, because there are far more buses heading on further south from Lima than there are going specifically to Paracas.

See here for how Paracas can be a romantic honeymoon destination.

Rainbow Mountain, a multi-colored ridge that is part of the greater...

This seven-day journey highlights all of the iconic landscapes, famous...

From the remote Machu Picchu ruins to the lush Amazon rainforest, this...

Explore the essential highlights of Peru, including visits to Cusco,...

Pavithra R.
New York, United States
"Kim Kim did a great planning for our 11 days trip to Peru. When we had to reschedule our Machu Pichu trip, the team did a great job in rescheduling. The air..." read more
Traveled to Peru as a couple in November, 2022
Create your custom-made trip to Peru
Get Started