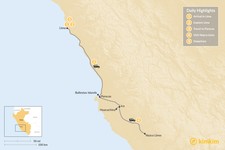 This itinerary is a great way to see the highlights in and around Lima. Get an authentic taste of Peru during your Lima city and food tour. Next, experience the beauty and wildlife of the Ballestas Islands and Paracas National Reserve. Finally, get an aerial view of the famous Nazca Lines - including massive etchings of a condor, a hummingbird, and a monkey. These impressive works of art are best viewed from the skies, as some of them are up to 600 feet in size!

Spend the day discovering Lima through its food. With a vibrant combination of Indigenous American, African, Asian, and European culinary influences, Lima is one of the world's most impressive gastronomic and cultural centers.

Stop for lunch at one of Lima's top restaurants and enjoy a delicious meal on a patio overlooking the Pacific ocean. Stroll to the bohemian district of Barranco—a popular oceanside neighborhood for artists, tourists, and locals alike—for a relaxed afternoon drinking coffee and sampling Peruvian desserts.

This morning you will have an early morning pick up from your Lima hotel and transferred to Paracas. Upon arrival to Paracas, you will then begin an adventurous boat trip to the nearby Ballestas Islands, an important sanctuary for marine life and made possible by the Humboldt Current. On the way to the islands, you’ll also see the Candelabra, a nearly 595-foot (181-meter) long, candlestick-shaped symbol etched into the side of a hill that can be seen from the sea. During the tour, you can get up close and personal with marine birds and sea lions. Some of the unique bird species you might see include the Humboldt Penguin and the Peruvian Booby which only live along the Humboldt Current, as well as the Guanay Cormorant and the Red-legged Cormorant. Depending on the season, you’ll see sea lions playing with their young or simply frolicking on the rocks.

After the boat excursion, you will then get a chance to explore the Paracas National Reserve. The tour begins with a visit to the reserve’s interpretation center. Here you will learn about the history and culture of the reserve.

You’ll stop at the turritellas, which are fossilized remains of sea snails that are now embedded into the ground. This whole area was once underwater, and the turritellas are a good reminder of this. The tour also visits The Cathedral. This million-year-old rock formation is set just off the coast but was unfortunately destroyed by an earthquake in 2007. The base of the formation, however, can still be seen.

You’ll explore the beautiful beaches of Playa Lagunilla, Red, and Yumaque. These beaches are very picturesque and are a good place to watch the waves roll in. After the tour, you will be transferred back to your hotel in Paracas.

This morning you will leave your hotel in Paracas and head to the Pisco airport. From here you will take a 90-minute flight south aboard a 12-passenger Cessna Grand Caravan to view the sprawling Nazca Lines. You will get a chance to see many of the most famous geoglyphs, including the hummingbird, dog, tree, whale, lizard, and more.

These massive images, the longest of which are  1,200 ft (370 m), vary from geometric lines to figures of animals and people. Due to the stable environment of the Nazca desert, these geoglyphs—which were created by removing the top layer of iron-oxide coated pebbles to reveal the light-colored clay underneath—have been remarkably well preserved.

After the flight head to Huacachina for an adventure in the desert sand dunes. Hop on a sandboard to surf down the larger dunes.

In the evening, transfer to your hotel in Lima.

Today, you will be met at your hotel for a transfer to the Lima Airport for your flight back home. ¡Buen viaje!

Discover the hidden rainforest in this 5-day exploration of northern...

For a quick trip that includes all of the highlights of the Sacred...

This itinerary is a great way to see the highlights in and around Lima....
Peru 5-Day Tours & Itineraries

Get off the beaten path with this unique itinerary through Peru. Take an...

This itinerary is a great way to see the highlights in and around Lima....

On this 10-day itinerary, get a taste of Peru's metropolitan capital...

On this weeklong journey through Peru, you'll get a taste of...

Get a taste of Peru's metropolitan capital of Lima, then head south to...
Best of Paracas

How Many Days to Spend in Lima

Come for the ocean views, stay for ancient ruins and first-class...

Lima is a majorly underrated destination for travelers with kids in tow....
Best of Lima

This itinerary is a great way to see the highlights in and around Lima....

On this weeklong journey through Peru, you'll get a taste of...

Get a taste of Peru's metropolitan capital of Lima, then head south to...

From Lima to the Nazca Lines to iconic Machu Picchu, this 9-day...

From Lima to the Nazca Lines to iconic Machu Picchu, this 11-day...
Best of Nazca

Explore Cusco, the Sacred Valley, and Machu Picchu on this epic one week...
Peru Tours & Itineraries

How Many Days to Spend in Peru

All aboard! Trains are a practical solution for traveling in Peru: they...

Peru is a land of extremes. You'll need layers of clothing for a daytime...

If you wish to experience the Peruvian Andes with a private guide—and a...

With 15 days in Peru, you can tick off the country's bucket-list...

While Machu Picchu is a must-see in Peru, there's more than one way to...

Peru is famous for the ruins of Machu Picchu to the south, but the...

With its pre-Inca farming terraces, 15th-century temples, and Baroque...

Rainbow Mountain, a multi-colored ridge that is part of the greater...
Getting Around Peru

Pavithra R.
New York, United States
"Kim Kim did a great planning for our 11 days trip to Peru. When we had to reschedule our Machu Pichu trip, the team did a great job in rescheduling. The air..." read more
Traveled to Peru as a couple in November, 2022
Create your custom-made trip to Peru
Get Started