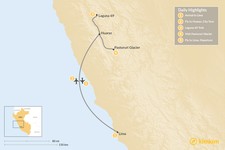 From metropolitan Lima to the remote Peruvian Andes, this 5-day adventure brings you to the heart of the mountains. Start in Lima— the capital of Peru—then take a quick flight to Huaraz, a mountain town popular with outdoor enthusiasts. Spend a day exploring the city's history, then head into the mountains to see stunning glaciated peaks, bright blue mountain lakes, and Peru's highest mountain—Mt. Huascaran, which towers at 22,205 ft.

This morning you will depart from your hotel in Lima early in the morning for check in to your 1-hour flight to Huaraz. Upon arrival, take the day to explore the city. This adventure hub draws tourists from all over the world to explore the mountains of the Cordillera Blanca.

Your tour today will include stops at the Plaza de Armas—a traditional central plaza ubiquitous across South America—the Regional Museum of Ancash, the Rataquenua observation deck for panoramic views, the Iglesia La Soledad, and the pre-Incan Wilcahuain ruins. Get a glimpse of what old Huaraz looked like on Jose Olaya street, which is the only street that remained intact after many earthquakes.

Your adventure this morning begins with a 6:00 AM pickup from your hotel in Huaraz. Travel north along the Huaylas Valley towards the small town of Yungay, then turn onto the dirt road that leads to Huascaran National Park. Along the way, you will pass Mount Huascaran, Peru’s highest peak at 22,204 ft (6768 m). Once you reach the national park, stop at Llanganuco Lakes for photos and a break.

Continue to Cebollapampa to start the 3-hour uphill hike to Laguna 69. The hike is breathtaking, with spectacular views of the Cordillera Blanca in every direction. Stop at Laguna 69, whose name comes from a clerical need for a lake without a traditional Quechua name, for a break and a chance for photos. For the daring travelers in the group, a quick dip in the icy lake will get your blood pumping.

Head back to Cebollapampa, a 2-hour hike, then back to Huaraz for the night.

After breakfast, head south out of the city to see mountain lakes and glaciers. Your first stop will be Patacocha Lagoon to see Andean wildlife and a stunning mountain lake. From here, head to the Lake Pumapashimi, also known as the Lake of 7 Colors for the visual effect produced by the reflection of the sun on the lake's algae. You'll also see the native titanca plant—the world's largest bromeliad, which can reach up to 50 ft (15 m) in height.

Continue to the entrance of Pastoruri to begin your 45-minute walk to the glacier. There is an option here to rent a horse, for those who prefer to ride instead of walking. Enjoy the views of the spectacular ice sheet and surrounding mountains, and feel rejuvenated in the fresh cold air. Hike back to the car and return to Huaraz.

Enjoy breakfast at your hotel, then transfer to the airport for your flight back to Lima. Spend the afternoon settling in and relaxing in the hotel, or go for a sunset walk in the romantic neighborhoods of Miraflores and Barranco along the Pacific Ocean before finding the perfect cafe or restaurant for dinner.

In the evening, transfer to the Lima airport for your homeward-bound flight.

The Inca Trail gets most of the publicity, but there are also several...

Peru is famous for the Inca Trail and other multi-day hikes, but if you...
Peru Trekking Tours & Itineraries

How Many Days Should You Spend in Lima?

Lima is a majorly underrated destination for travelers with kids in tow....

Come for the ocean views, stay for ancient ruins and first-class...
Best of Lima

Twice as deep as the Grand Canyon, the Cotahuasi is the deepest canyon...
Peru Tours & Itineraries

Lima is a majorly underrated destination for travelers with kids in tow....
Peru Destination Guides

Embark on a quick-yet-adventurous five-day tour of Northern Peru’s...

In just over one week, explore the best of Northern Peru. Begin in...

Archaeology & Culture in Northern Peru: From Trujillo to ...

Explore the culture and archaeology of Northern Peru on this eight-day...

This 8-day tour is perfect for history buffs with a sense of adventure....

Steeped in history, this fascinating tour covers the most important...

How to Get from Cusco to Machu Picchu

As befits a significant historic location, Machu Picchu has several ways...
Getting Around Peru

S
Swetha B.
New York, United States
"Not sure where to start but this trip was pre-planned way ahead of time to accommodate our vacation and kids spring break for 2020! And NOT to forget our 15t..." read more
Traveled to Peru as a family in March, 2020
G
Galina R.
Arkansas, United States
"Kimkim team has provided excellent service. All scheduled activities were in time, shared guided tours were well organized and well performed. Did not have a..." read more
Traveled to Peru solo in March, 2020

Jeff S.
Louisiana, United States
"This was a 5 plus star experience and completely exceded my expectations. Steve worked with me with my times and desires. For example, I had no desire to sp..." read more
Traveled to Peru as a couple in March, 2020
S
Steve S.
Michigan, United States
"The trip to Peru was fantastic. Cesar Surco, our guide post Lima, was exceptional in every way. He was patient, kind, knowledgeable and an absolute genius ..." read more
Traveled to Peru as a group in February, 2020

Carlos D.
Virginia, United States
"My wife and I used Kimkim for our honeymoon to Peru. Their services, prices, availability of their staff and willingness to accommodate our travel arrangemen..." read more
Traveled to Peru as a couple in December, 2019
Plan your trip to Peru
Customize your trip with help from a local travel specialist
Plan Your Trip