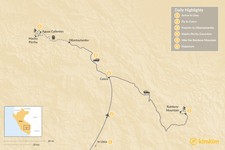 Explore the essential highlights of Peru's Sacred Valley, including visits to Cusco and Machu Picchu. Then, journey through a land of wild desert landscapes, snow-capped peaks, and herds of alpacas to arrive at your ultimate destination: the rainbow-painted slopes of Mount Vinicunca hidden deep in the Andes.

Welcome to Lima, Peru's largest city and central metropolitan hub, and home to one-third of the country's population. Located at the site of a pre-Columbian indigenous Ychsma settlement, which was conquered by the Inca empire in the 15th century and later by the Spanish conquistadores, Lima has a fascinating history and a diverse mix of cultures. Amerindian, European, Afro-Peruvian, and Asian—especially Chinese and Japanese—influences make Lima a dynamic and exciting city to explore.

Settle into your hotel before sitting down to a delicious meal. With some of the worlds' top restaurants and an eclectic mix of culinary styles, there is no shortage of delightful and exciting dining options.

From Cusco, you'll be picked up for a trip to the impressive archaeological site of Sacsayhuaman ("Sacred Falcon"), thought by archeologists to have been a guard point for the Incan capital. Take a guided tour, followed by a big picnic with foods native to this region of the country.

In the afternoon,  arrive in Ollantaytambo, one of the most beautiful towns in the Sacred Valley, with plenty of time to relax. This is where you'll be based for the next couple of nights.

After breakfast, take the local train to Aguas Calientes, the base for most Machu Picchu adventures. The ride takes you through a valley and into the Urubamba River canyon, then into the cloud forest as you near the Machu Picchu sanctuary.

Aguas Calientes contains the train station, a craft market, restaurants, and a variety of hotels for those who prefer to spend the night at the foot of the mountain and climb it early in the day. Stop here for lunch before taking the 25-minute bus ride up to the Machu Picchu ruins.

This 15th-century Inca citadel is located at 7,970 ft (2,430 m) and is a masterpiece of engineering that served as a sanctuary and retreat for the Incan Emperor Pachacutec and his royal court. Machu Picchu, which means "Old Mountain," is considered a World Heritage Site by UNESCO and is one of the new Seven Wonders of the World.

Built as a seasonal residence for the Inca family, Machu Picchu was rarely home to more than 800 people, and during the royals' absence, a mere 100 servants would remain at the site to maintain the grounds. Machu Picchu was abandoned 100 years after construction due to the Spanish conquest and remained largely hidden to the outside world until the early 20th century.

Your guide will lead you around the site and explain the different buildings and curious corners of the building complex. Approximately one-third of the site has been reconstructed into its original structure, giving visitors a sense for the grandeur and artistry of the original citadel.

After the two-hour tour, take the bus back to Aguas Calientes to connect to your train to Ollantaytambo and your connecting transfer to Cusco. Rest up—you have an early morning tomorrow.

Rise and shine—you'll start your day with an early morning pick-up for the 3.5-hour drive to the start of the trek. When you reach the trailhead, enjoy some breakfast before starting the hike. You'll begin at Chillca, and from here it will be a 4-hour, uphill hike to reach the famous Rainbow Mountain.

Along the way, enjoy amazing views of the Andes, glacial peaks, red mountains, rocky hills, along with llamas and alpacas grazing along the valley. Once you reach the top, you'll have time to rest, snack, and take in the scenery. You will also see amazing views of the valleys, Cordillera Vilcanota Range, and Ausangate Glacier Peak—the tallest mountain of the Cusco region at just under 21,000 ft.

After taking in the view, we'll descend back to our car and driver for the drive back to our hotel in Cusco. For a 2-day version of this trek, take a look at this article.

Today is your last day in Peru. You will be met at your hotel for a transfer to Cusco Airport, where you'll catch your flight home.

Where to Stay in Cusco - The Best Boutique Hotels

Cusco and the Sacred Valley are brimming with accommodation, from...

Cusco serves as the perfect base to explore the numerous sights of the...

Best Things To Do In Cusco

The former capital of the Incas, Cusco is today a bustling city that...
Best of Cusco

How Many Days to Spend in Lima

Come for the ocean views, stay for ancient ruins and first-class...

Lima is a majorly underrated destination for travelers with kids in tow....
Best of Lima

How Many Days to Spend at Machu Picchu

The vast and fascinating Inca citadel of Machu Picchu is what you make...

For tourist-free views of Machu Picchu, visit in January. Peru's most...

The big heads-up for Machu Picchu-bound travelers this month is that the...

The Inca Trail reopens, the wet weather starts to subside and, should...
Best of Machu Picchu

Explore Cusco, the Sacred Valley, and Machu Picchu on this epic one week...
Peru Tours & Itineraries

How Many Days to Spend in Peru

All aboard! Trains are a practical solution for traveling in Peru: they...

Peru is a land of extremes. You'll need layers of clothing for a daytime...

If you wish to experience the Peruvian Andes with a private guide—and a...

With 15 days in Peru, you can tick off the country's bucket-list...

While Machu Picchu is a must-see in Peru, there's more than one way to...

Peru is famous for the ruins of Machu Picchu to the south, but the...

With its pre-Inca farming terraces, 15th-century temples, and Baroque...

Rainbow Mountain, a multi-colored ridge that is part of the greater...
Getting Around Peru