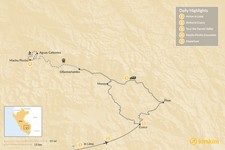 For a quick trip that includes all of the highlights of the Sacred Valley, look no further than this 5-day Peruvian jaunt. Tour the beautiful Sacred Valley and see less-visited Incan ruins, get to know the culinary and cultural elements of Cusco, and—of course—spend a full day exploring the bucket-list-worthy wonder of Machu Picchu.

Settle into your hotel before sitting down to a delicious meal. With some of the worlds' top restaurants and an eclectic mix of culinary styles, there is no shortage of delightful and exciting dining options.
Plan your trip to Peru
Chat with a local specialist who can help organize your trip.
Get Started

Your first stop today is Pisac, where you'll visit the ruins of the town and a market where you can pick up some handicraft souvenirs. Then head to Moray, where you'll see the three famous amphitheater-like terraces made by the Incas. These terraces are carved deep into the earth in the shape of a bowl. It is believed that the Incas once used these terraces as agricultural laboratories to determine the optimal conditions for growing crops.

In the afternoon, depart for Ollantaytambo, which contains some of the best-preserved Inca architecture in the entire Sacred Valley. Roam the winding alleys and vast plazas and gaze upon a marvelous llama-shaped ruin before heading to a local hotel for the night.

After breakfast, take the local train to Aguas Calientes, the base for most Machu Picchu adventures. The ride takes you through a valley and into the Urubamba River canyon, then into the cloud forest as you near the Machu Picchu sanctuary.

Aguas Calientes contains the train station, a craft market, restaurants, and a variety of hotels for those who prefer to spend the night at the foot of the mountain and climb it early in the day. Stop here for lunch before taking the 25-minute bus ride up to the Machu Picchu ruins.

This 15th-century Inca citadel is located at 7,970 ft (2,430 m) and is a masterpiece of engineering that served as a sanctuary and retreat for the Incan Emperor Pachacutec and his royal court. Machu Picchu, which means "Old Mountain," is considered a World Heritage Site by UNESCO and is one of the new Seven Wonders of the World.

Built as a seasonal residence for the Inca family, Machu Picchu was rarely home to more than 800 people, and during the royals' absence, a mere 100 servants would remain at the site to maintain the grounds. Machu Picchu was abandoned 100 years after construction due to the Spanish conquest and remained largely hidden to the outside world until the early 20th century.

Your guide will lead you around the site and explain the different buildings and curious corners of the building complex. Approximately one-third of the site has been reconstructed into its original structure, giving visitors a sense for the grandeur and artistry of the original citadel.

After the two-hour tour, take the bus back to Aguas Calientes to connect to your train to Ollantaytambo and your connecting transfer to Cusco.

Today is your last day in Peru. You will be met at your hotel for a transfer to Cusco Airport, where you will transfer to your international departure.

Discover the hidden rainforest in this 5-day exploration of northern...

For a quick trip that includes all of the highlights of the Sacred...

This itinerary is a great way to see the highlights in and around Lima....
Peru 5-Day Tours & Itineraries

Places to Go Before or After Machu Picchu: Options for 1 ...

The Incan citadel of Machu Picchu is the most popular destination in...

Cultural Highlights of the Sacred Valley

The Sacred Valley is one of Peru’s most popular destinations. Once the...

Best Adventures in the Sacred Valley

Experience the rich culture, tastes, and history across Peru and Bolivia...

During this 12-day journey, you will witness the rich culture, history,...

Witness the ancient beauty and natural wonders of Peru and Bolivia...

Immerse yourself in the culinary delights, outdoor wonders, and cultural...

Immerse yourself in the beauty and culture of Peru's Sacred Valley on...

Sachin V.
Texas, United States
"Thanks to Liz! for an AMAZING trip! For this once in a life time trip, we entrusted Liz at KimKim.com to plan our trip. This is our second trip with KimKim ..." read more
Traveled to Peru as a family in November, 2021
I
Isaiah N.
Washington, United States
"We had an incredible experience working with Kristy from the very beginning. Kristy answered all of our questions and was always very attentive when we were..." read more
Traveled to Peru as a couple in December, 2021

Martin M.
New Jersey, United States
"This trip by far exceeded all our expectations. We spent 16 amazing days in Peru with our 3 boys, great guides and meticulously prepared itinerary which open..." read more
Traveled to Peru as a family in August, 2021
Create your custom-made trip to Peru
Get Started