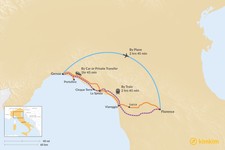 Renting a car and driving through Tuscany's rolling green hills to the Italian Riviera coast is the quickest and most immersive mode of transportation to take, allowing for stops in well-known destinations like Cinque Terre, Portofino, and Genoa, to name a few.

You can also take a train from Florence to Genoa and travel around the Italian Riviera from there. Direct high-speed trains run twice a day, while multiple regional trains run on an hourly basis. Keep in mind that you have to make a seat reservation in advance for high-speed trains, while regional trains do not require this. You can also opt for an 8-day trip around Cinque Terre or a 13-day trip around the Italian Riviera.

Duration: 1 hour and 40 minutes (depending on traffic)

As mentioned above, driving to the Italian Riviera is the most efficient and scenic way of seeing the Mediterranean coast. Having control of when you stop and where allows for seeing all of the most popular towns and cities the coast has to offer, starting with the port city of La Spezia (where you can easily access Cinque Terre). After driving out of Florence, take the A11, A12, and A15 autostradas—which means toll road—and exit toward La Spezia, all of which clocks in under 2 hours. It's truly as simple as that. Plus, along the 1-hour and 40-minute journey, you can stop in the likes of Lucca and Viareggio.

From La Spezia, drive north up the Italian Riviera toward Genoa, which takes about 1 hour and 20 minutes (as always, depending on traffic). Get back on A12 autostrada and take the Genoa-Nervi exit. Stop in the historic town of Rapallo and the fishing village of Portofino along the way. From Genoa, venture west along the Mediterranean coast on A10 autostrada and visit the historic port city of Savona and Alassio, a beach town that is known for its scenic views.

While trains going to Genoa leave from both of Florence's stations, the two direct and fastest routes depart from Firenze Campo Marte station and will get you to Genova Brignole station in under three hours. Italy's government-run railway Trenitalia operates these two high-speed trains, one of which leaves at 7:28 a.m. while the other departs at 9:04 p.m. If neither of those works with your schedule, regional trains depart on an hourly basis that take anywhere between 3 hours and 4 minutes and 6 hours and 16 minutes, often with multiple transfers involved. Keep in mind that high-speed trains require seat reservations, which are made upon purchasing your ticket, while regional trains do not.

Upon arriving at Genova Brignole, you can walk 10 minutes to Genova Piazza Manin station and take the regional train operated by AMT Genoa public transport to various parts of the city. After exploring the capital of the Liguria region, take a train or rent a car and drive east and west to explore other parts of the Italian Riviera.

Flying from Florence Airport to Genoa Airport is another option that is on the more expensive side. Also, while the flights headed to Genoa are the same duration as high-speed trains, keep in mind the 90 minutes at the airport before departure as well as the time it takes to get to and from both airports.