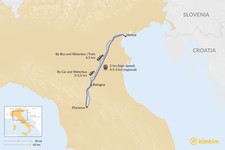 Venice and Florence are two of the most-visited cities in Italy, making transportation between the two quite simple.

It’s important to understand that 'Venice' refers to two sub-cities which are often differentiated by their main railway station. On Italy’s mainland, Venice Mestre is the more affordable, less picturesque, industrial part where many choose to book affordable accommodation. Venice Santa Lucia is the Floating City of Art & Culture composed of over 100 islets divided by canals and is the postcard Venice you likely have in mind.

The most convenient option to get from Florence to Venice is by high-speed train, which is direct with frequent options with both Venice Mestre and Venice Santa Lucia as destinations. A more affordable option is a private bus carrier which would have to be supplemented with a second waterbus transfer to arrive to Venice Santa Lucia's pedestrian-only center.

Those with more time to spend may choose to opt for a drive between the two. However, the car cannot be used while in Venice Santa Lucia potentially making it an inconvenient hassle to park and an unnecessary cost.

Before heading to busy Venice, make sure to read these essential Tips for Beating the Crowds. If you're intrigued by the idea of a Bacaro & Private Squero Tour in Venice you may want to explore this 6-day itinerary between Venice and Florence.

This is the most convenient and most relaxing mode of transportation to get from Florence to both Venice Mestre and Venice Santa Lucia. Considering both cities are major hubs, there are very frequent high-speed train options between the two serviced by Italy’s main train operators, Trenitalia and Italo. The earlier the train tickets are purchased, the less pricey they are likely to be.

The main advantage of train travel is both Florence’s center train station, Santa Maria Novella, and Venice’s, Santa Lucia, are positioned directly in the center so that you can leave from one major landmark to the next with minimal travel. Once you arrive to Venice Santa Lucia via train travel you’re already at The Grand Canal.


By Bus and Waterbus or Train

The bus route between Florence and Venice is only run by private operators such as Europe’s low-cost bus company, Flixbus.

It’s an affordable option as the ticket price is likely to be half of the train’s. The downside of bus travel is that there is no direct option to Venice Santa Lucia’s center; Tronchetto, an artificial island in Venice’s Lagoon, is the nearest destination.

Depending on the bus ticket you purchase, buses will pick you up at either Florence’s Piazzale Montelungo or Villa Costanza and then drop you off at either the Venice Mestre train station or at Tronchetto.

For the route that gets you to Tronchetto, you can take the vaporetto—the Venetian waterbus—to go to Venice Santa Lucia (15 minutes) or to any other destination on its route.

For the route to Venice Mestre, you can take any of the high speed trains to the Venice Santa Lucia train station (10 minutes).

By Car and Waterbus

This is the least convenient option as the car will have to be parked during your entire stay in Venice. Considering that Venice Santa Lucia is primarily a city on water, no cars are allowed entry. Additionally, the rental may have accrued hefty fines from Florence’s strict driving laws in its city center so it is neither convenient during the departure nor the destination.

Taking the A13 or the A4/E70, the drive from Florence to Venice cuts straight through Bologna, one of Italy’s most famed food cities for its pork-heavy food culture; a suggested shopping detour for tortellini and mortadella (more food ideas in the Ultimate Guide to Bologna).

For parking, you can choose to leave the car right outside the city center. Piazzale Roma is the nearest—and the most expensive—parking area in Venice S. Lucia for which you can book a spot online in advance. You can also park in the more affordable Tronchetto, an experience in itself considering that it is an artificial island dedicated almost entirely to parking. You will then have to take the vaporetto to go Venezia Santa Lucia (15 minutes).