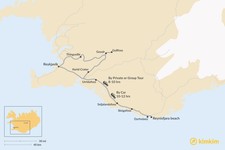 Traveling from Iceland's famous Golden Circle to the wildly scenic South Coast is an endeavor best done by self-driving to maximize your time spent exploring. Arranging for a private driver is an option as well, however, more expensive. The 225-mile (362 km) journey from Geysir to Jökulsárlón is full of stunning landscapes and opportunities for outdoor pursuits.

After taking in the sights of Thingvellir National Park, Geysir geothermal area, and the impressive Gullfoss waterfall, you may want to venture a bit off the tourist track before adventuring on the South Coast. This article has ideas for experiencing the Golden Circle like a local.

Depending on which attraction you're departing from on the Golden Circle route, a direct drive to Jökulsárlón, the end of the south coast region, it would take approximately five hours. However, it's wise to allow for plenty of extra time to explore as this is one of the most scenic drives in the country.

For a more detailed look at some of the major attractions on this route, check out the Best of Iceland's South Coast & Golden Circle. Taking some of the ideas from this itinerary will bring you up close and personal with the well-known waterfalls, Seljalandsfoss and Skogafoss, marveling at Dyrholaey, and stepping on Reynisfjara black sand beach, (in addition to the Golden Circle).

By Group or Private Transfer

It would be possible to hire a driver and make the journey on a private tour within a full day if based near one of the Golden Circle highlights, but spreading it out over two days would be a little more relaxed for optimal enjoyment. Since most group tours depart from the airport in Keflavik, or downtown in Reykjavik, it wouldn't be possible to start and end in the Golden Circle.

Explore the best of the west and south with this 7-9 day itinerary. Hike...

This 7-day itinerary will take you to the north, away from the crowded...

With 10 days on the road, you can discover a variety of regions and...

Reykjavik and the Snaefellsnes Peninsula - 4 Days

If you have 4 days in Iceland you can enjoy Reykjavik's city life and...

This epic 12-day road trip is a perfect way to absorb Iceland as you...

For road trip enthusiasts, it doesn't get much better than encircling...

This chilly, scenic self-drive tour is perfect for nature lovers and...

P
Pavithra R.
Virginia, United States
"My husband and I had a wonderful 8 day tour of Iceland's Snaefellsnes peninsula and the Golden circle. We had high expectations for the trip, but the actual ..." read more
Traveled to Iceland as a couple in May, 2021

Michelle B.
Oklahoma, United States
"Our trip was beautifully planned by Pauline. We did a 10-Day Winter Drive in the southern half of Iceland. Her itinerary was very detailed with interesting ..." read more
Traveled to Iceland as a family in December, 2019
T
Theresa C.
Vermont, United States
"We had an amazing time and it was so easy to plan. Pauline took into account all of our requests and made it very easy and accessible for us, " read more
Traveled to Iceland as a couple in December, 2019
M
Mary Ellen C.
New Jersey, United States
"Preeti did a fabulous job!!!! Everything was terrific! Very well organized and detailed..... The only activity that we didn’t enjoy as much as everything els..." read more
Traveled to Iceland as a couple in October, 2019
Create your custom-made trip to Iceland
Get Started