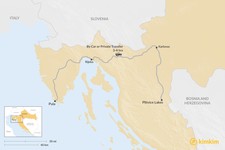 The primary way to travel between Istria and Plitvice Lakes National Park is by rental car or private transfer. From Pula, the main city in Istria, to the national park is roughly 150 miles (242 km).

Though it is possible to take the bus, it is a far less comfortable option and generally requires upwards of seven hours. Renting a car or going by private transfer is a great option for those who wish to make stops along the way to see other sights or towns such as Rijeka or Zagreb.

For trip ideas, consider cycling the wine roads of Istria or see the highlights of Croatia with this seven-day itinerary.

There are a number of major car rental companies in Pula that offer manual and automatic vehicles (though automatic cars are more expensive to rent). Gas in Croatia is bought by the liter and tends to be expensive because a tank requires four liters to make up one gallon.

Depending on the route, traffic conditions, and tolls, the trip from Istria to Plitvice Lakes can take as little as three hours. The main route takes the highway through central Croatia and through Opatija and Rijeka, which are great places to stop for a coffee break or a meal. It later splits off onto a smaller highway that requires a slower speed, but provides great views of the lush and rural farmlands.

The route along E65 and 42 is the fastest assuming there is no traffic. Keep kuna (local currency) on hand for the toll fares for each direction both to and from Plitvice Lakes National Park. An alternative route follows E71, and requires roughly the same amount of time because it follows the bigger motorway, which utilizes a higher speed limit, almost all the way to the lakes.

Though there are several travel options between Zagreb and Split, the...

Discover the ancient cities and natural wonders of Croatia's stunning...

Explore Croatia's top cities and cultural sights on this 10-day Best of...

Set out to explore the hidden gems of Croatia on this extensive two-week...

Leslie D.
Maryland, United States
"Eva and i have discussed our feedback and she will be writing a more detailed review, but I just want to add my Complete satisfaction with KimKim and specif..." read more
Traveled to Croatia as a couple in September, 2019
Plan your trip to Croatia
Customize your trip with help from a local travel specialist
Plan Your Trip