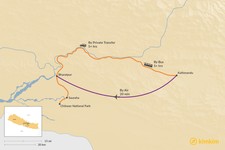 Nepal's Chitwan National Park is on the flat, jungle-covered plains of southern Nepal, about 60 miles (96 kilometers) from Kathmandu. It's a popular detour for visitors traveling between Kathmandu and Pokhara, because although it isn't on the way on the most direct route, it's roughly half-way between the two cities.

Most visitors base themselves around the town of Sauraha, which has many hotels and tour operators. Others stay in the quieter village of Barauli, on the western end of the park, where there are a handful of accommodation options, including the high-end Tiger Tops Tharu Lodge. It's important to know which town you're heading to, as many people would assume that you're staying in Sauraha when you say you're off to the Chitwan National Park.

The air hub for the Chitwan National Park is the city of Bharatpur, about 10 miles (16 kilometers) from Sauraha, or 30 miles (48 kilometers) from Barauli. There are several flights between Kathmandu and Bharatpur every day. Flight times are 20 minutes. This flight is one of Nepal's less scenic, as it travels from the hills to the plains, but it is by far the most convenient option of getting between the two places. Taxis are plentiful at Bharatpur Airport.

On a good day, the overland journey between Kathmandu and the Chitwan National Park is only about five hours. It's a scenic drive, following the Trisuli Valley much of the way, with its steep forest-covered hills and farming villages, and then turns south at Mugling and towards the plains. However, traffic jams of two hours or more are extremely common, first at Kalanki when leaving the Kathmandu Valley, and then around Mugling, where roadworks have been ongoing for years.

Many high-end hotels can arrange private transfers between Kathmandu and the Chitwan National Park. This is the most comfortable way to travel overland. Private transfers aren't much faster than buses, but they do usually come with air conditioning, good suspension, and the ability to stop when you wish.

Tourist buses are another way to get from Kathmandu to Chitwan. These leave from near Thamel in Kathmandu early in the morning and arrive in Sauraha several hours later. They usually stop a couple of times for meals and toilet breaks. Tourist buses are usually air-conditioned, and moderately comfortable. Local buses are also available, but are generally very uncomfortable and not as safe as tourist buses.

Pokhara and Lumbini are two of the most popular travel destinations in...
Getting Around Nepal

Julian O.
United Kingdom
"Simply amazing. Awesome flexibility on planning before departed. Amazing guides. Logistics went like clockwork, even when we decided to change plans on a day..." read more
Traveled to Nepal as a couple in November, 2022
T
Tim C.
California, United States
"Raj and Bipin organized an 11 day trek to Langtang and Gosaikunda for me. Raj was responsive and patient as he worked with my preferences and scheduling cons..." read more
Traveled to Nepal solo in October, 2022

Joan P.
Spain
"My trip to Nepal was great. Sherpa Ngima was all the time ofering me all I needed douring my stay there. He was very friendly and profesional. He's a reliab..." read more
Traveled to Nepal solo in November, 2022

Anna R.
United Kingdom
"Amanda was fantastic in helping us identify a trek that met all of our requirements, and answering our many questions. The briefing meeting after we arrived ..." read more
Traveled to Nepal as a couple in October, 2022
L
Linda S.
Connecticut, United States
"Many thanks to KimKim for Raj of Social Tours (Nepal) & Sherab of Bhutan Travel Club & their addressing all of the details of this glorious trip. Leki Tsheri..." read more
Traveled to Nepal solo in October, 2022

Anita S.
Texas, United States
"Ngima and his team did an outstanding job from the planning stages all the way. Ngima was very prompt in responding to all my queries and helped us plan our ..." read more
Traveled to Nepal as a couple in October, 2022

David M.
North Carolina, United States
"Thank you for reaching out and asking about our trip. It exceeded all of our expectations! First, Kimkim and Himalayan Trails executed everything perfectly. ..." read more
Traveled to Nepal as a family in October, 2022
V
Vinitha S.
Texas, United States
"Raj planned a 11 day trip to Nepal for us. During the planning stages he provided quick and very detailed responses to our questions and also made himself av..." read more
Traveled to Nepal as a couple in October, 2022

Charlie H.
Nevada, United States
"We had an AMAZING trip with Sherpa Wangchhu and our porter, Nima, on the Tamang Heritage Trail. It was a true pleasure to stay with locals in towns like Tato..." read more
Traveled to Nepal as a couple in October, 2022

Angie P.
Malaysia
"Very good coordination with Amanda prior the trip and the route were customized to what I am seeking. The guides and porter are very friendly and helpful. ..." read more
Traveled to Nepal as a couple in October, 2022
Create your custom-made trip to Nepal
Get Started