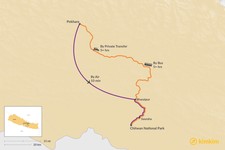 The Chitwan National Park is on Nepal’s WesternTerai, 52 miles (84 kilometers) from Pokhara. Although it’s not on the most direct route between Pokhara and Kathmandu, it’s about equidistant from both cities, so is a convenient place to make a detour to when traveling around Nepal.

Most visitors to Chitwan stay in Sauraha, which has a wide variety of hotels and tour operators. But it’s also possible to stay in the quieter village of Barauli, on the western end of the park, where there are some good accommodation options, including Tiger Tops Tharu Lodge. It's important to know which town you’re staying in before heading there, so that you’re taken to the right place. Pokhara is a 105-mile (170-kilometer) journey from Barauli, as the road is not so direct, whereas it’s only a 52-mile (84-kilometer) journey from Sauraha. Plus, Sauraha and Barauli are 38 miles (62 km) apart, so going to the wrong town would be more than a minor inconvenience.

The air hub for the Chitwan National Park is the city of Bharatpur, about 10 miles (16 kilometers) from Sauraha, or 30 miles (48 kilometers) from Barauli. There’s only one daily flight between Pokhara and Bharatpur. It’s a very short flight, so if the timing of the flight suits your schedule, you can save yourself a long car or bus journey. It’s easy to catch a taxi at Bharatpur Airport to your hotel, or some hotels can arrange a pick-up and transfer.

Travel specialists and high-end resorts can arrange private transfers between Pokhara and the Chitwan National Park, or these can be arranged independently. They’re definitely the most comfortable way to travel overland. Private transfers usually come with air conditioning, good suspension, and the ability to stop when you wish.

Tourist buses are another way to get from Pokhara to Chitwan. Most of these leave from the Tourist Bus Park in Pokhara, although the more expensive and higher quality Green Line Bus leaves from its own stop near Damside. They arrive at the Tourist Bus Park (Bachhauli) just north of Sauraha several hours later, and usually stop a couple of times for meals and toilet breaks.

Tourist buses are usually air-conditioned, and moderately comfortable. Local buses are also available, but are generally very uncomfortable and not as safe as tourist buses. If staying in Barauli, it’s probably faster to get a tourist bus to Sauraha first and then get a private transfer (or local bus) from there.

Get up close with some of the world’s highest peaks on this moderate...

Experience the diversity of Nepal with this golden triangle of...