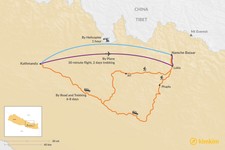 Namche Bazaar is an essential stop on the Everest Base Camp (EBC) Trek, as well as other treks in the Everest Region. There is no vehicle road access there, making the journey between Kathmandu and Namche Bazaar quite an adventure.

Most travelers fly from Kathmandu to Lukla, and trek to Namche Bazaar from there. However, Kathmandu's airport is undergoing renovation for the rest of 2019. During this time, flights between Kathmandu and Lukla will depart from Manthali's Ramchhap airport, a 4-5 hour drive from Kathmandu.

Nine flights operate daily, from 6 am to 10:30 am. You can either drive to Manthali the day before your trek and spend the night (keep in mind that accommodation is basic) or you can leave Kathmandu at midnight on the same day. For those who are short on time, you can still take a helicopter from Kathmandu to Lukla.

By Air and on Foot

Most travelers get from Kathmandu to Lukla by plane, a journey of just 30 minutes. The Tenzing-Hillary Airport is infamous due to its short, mountain-side runway, which has caused many accidents. But, most flights arrive and leave from there without incident, so there's no real cause for alarm.

Delays, however, are very common due to weather conditions in Kathmandu, Lukla, or en route. It’s important to build some buffer days into your itinerary in the Everest region, so you don’t risk missing an important international connection if Lukla flights are grounded for a day or two. Helicopters are a handy back-up option if you had been booked to fly on a canceled or seriously delayed flight. They can fly in weather that airplanes can't, so in an emergency could get you back to Kathmandu.

After arriving in Lukla, Namche Bazaar is still several hours' walk away. While the walk can be done in one long day, it's much more comfortable to spread it over two. Depending on the time you arrive in Lukla after your flight, there may not actually be time to walk all the way to Namche, even if you're fit and raring to go. The trail is steadily uphill—even more so on the second day—and follows the Dudh Kosi River for much of the way. The first night of the EBC trek is often spent in Phakding.

On day two, trek from Phakding to Namche Bazaar. It's a steep trail so is quite a challenging day's walk. But the rewards are also high, and include the high Hillary Suspension Bridge and your first glimpse of Everest through the trees. Most trekkers stay in Namche for at least one full day/two nights to help with acclimatization. There are a few things to see and do in the town; read more about them here: 5 Things to Do During Your Acclimatization Stop in Namche Bazaar.

By Road and on Foot

To avoid the flight to Lukla and enjoy more time trekking, it's possible to take a Jeep to Jiri or Phaplu from Kathmandu (about a day's journey), and then trek to Lukla and onwards to Namche Bazaar.

The trek from Jiri is known as the "Pioneers' Route" because it's how pioneering mountaineers used to reach the Khumbu region before the airport was built in Lukla in the 1960s. Nowadays this is an uncommon way of accessing the region, but the trails are uncrowded, with interesting cultures and beautiful views. The trek from Phaplu to Lukla takes three days, and Jiri to Lukla five, with another two days' walk to Namche Bazaar.

If you’re not on a tight budget, traveling from Kathmandu to the Everest region by helicopter is an unforgettable experience. You’ll leave from the domestic terminal of Kathmandu’s Tribhuvan Airport, and arrive in Lukla less than an hour later. Most sightseeing day tours stop in Lukla before carrying on to EBC, with a breakfast stop somewhere on the way back. Namche Bazaar (or, the landing field above the town) isn't on every tour itinerary, but it could be if you specifically request it.

Customizable luxury heli-trekking tours (such as the Luxury Everest Heli Trek - 4 Days) can also be designed to facilitate travel between Kathmandu and Namche Bazaar. These tours potentially save you time and a lot of physical exertion, while still allowing you to see some of the most beautiful mountain scenery in Nepal.

Both Lukla and Namche Bazaar are essential stops on the Everest Base...
Getting Around Nepal