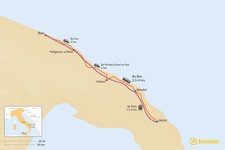 Whether you travel from Lecce to Bari by train, car, or bus, there's plenty to see along the way. Taking the train is the fastest option, though you can also travel by car or bus. The cities are 95 miles apart, so hiring a private driver or taking a taxi is also feasible. Flying is impractical because the two cities are so close together.

Possible sightseeing stops between Lecce and Bari include Puglia's many sandy beaches, the whitewashed hill town of Ostuni, and Polignano a Mare, famous for its cliffside beach, Cala Porto, and for the Balconata sul Mare, the best and most popular place to view Cala Porto.

Trenitalia's fastest frecce trains make the trip from Lecce to Bari in an hour and a half. Slower InterCity and regional trains take about two hours, depending on how many stops are on your route. Taking the train from Lecce to Bari is the quickest and easiest way to travel between the two cities.

You can easily drive from Lecce to Bari, but beware of speed cameras along your route. Also, both Lecce and Bari have a Zona a Traffico Limitato (ZTL), an area of the city where only authorized vehicles may drive. If you enter the ZTL by car and do not have a permit, you will get a ticket.

Driving between Lecce and Bari has some advantages, however, as you can stop along the way to visit one of Puglia's famously clear beaches or have lunch in Ostuni or Polignano a Mare. Parking is limited in both towns; consider parking near the train station and taking a bus or taxi to the historic town center. Be sure to take everything out of the car's passenger compartment, and bring valuables with you rather than leaving them in the trunk.

If you decide to make the 95-mile drive, take Strada Statale 613 (SS613) to Brindisi. Here SS613 merges with SS379/E55 and SS16/E55 and loops around the city. Stay on SS379 (do not take SS16) and continue north to Fasano. In Fasano, SS379 once again becomes SS16/E55. Depending on your Bari destination, you can exit SS16 at the Tangenziale di Bari/Bari Lungomare exit and take the coast road, or stay on SS16 until you reach your designated exit.

The drive from Lecce to Bari takes about two hours, but in July and August the trip can take much longer because of heavy beach traffic. Try to time your drive so that you are on SS379 between 1:00 pm and 3:30 pm to avoid lengthy delays.


By Private Driver or Taxi

If you want the flexibility of a private vehicle without the stress of driving, consider hiring a private driver or taking a taxi from Lecce to Bari. It will cost more, but you will be able to stop and go as you please, and you won't have to worry about traffic or finding your way.

Three private bus companies offer service from Lecce to Bari, and schedules vary by day and season. The trip from Lecce to Bari takes between two and one half and four hours, depending on which bus you choose.

If thirteen days exploring the sunny Puglia region seems like a lucky...