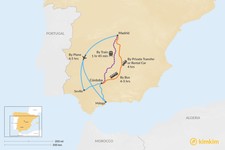 The distance between Spain’s capital, Madrid, and the ancient Andalusian city of Córdoba is 183 miles (295 km), traveling south. The easiest and fastest way to make the trip is by the direct high-speed train, which takes about 1 hour and 45 minutes. Driving yourself in a rental car is also a possible option, but takes a lot longer (4 hours).

The most luxurious option is to hire a private car service. There are no direct flights to Córdoba, as the airport only supports private planes. A creative option is to fly to one of the nearby cities of Málaga or Seville (you can make a day trip of it) and take a short train from there.

Buses are the most economical choice, but can take up to 5 hours.

By far the most logical and quickest option, taking the AVE train moves you directly from the Madrid-Puerta de Atocha Station, Madrid’s main train station to Córdoba Central, only 20 minutes walking to Córdoba’s main attraction—the Mezquita, a massive mosque dating from 784 CE and one of the world’s greatest examples of Moorish architecture.

AVE trains, run by Renfe, are comfortable and offer air conditioning, a bar-buffet car, and power outlets. Three tiers of tickets are available including turista (standard), turista plus (comfort), and preferente (premier). Turista plus customers enjoy a spacious reclining seat, while the preferente selection offers food service at your seat and access to business lounges at select stations. Not all tiers are available on every train, so if you want a particular class you should book ahead of time through Renfe’s website to make sure it is available.

Trains run hourly, the earliest typically leaving Madrid at 7 am and the latest departing in the evening.

Having a car gives you the freedom to explore the route between Madrid and Còrdoba, and perhaps take a few side trips along the way. The fastest route brings you south on the A-4 highway. Just an hour from Madrid you will pass Toledo, the first capital of the Spanish Empire and filled with Arab, Christian, and Jewish monuments in its walled Old Quarter.  This stop only adds 20 minutes to the trip.

Further down the A-4 you will run into the Parque Natural de la Sierra de Andújar, a great stop for any wildlife appreciators, as it is home to five endangered species and the largest Iberian lynx population in the world.

Alternately, hire a private transfer. You can request scenic stops along the way, including the opulent royal palace and UNESCO World Heritage Site, Aranjuez, or the city whose countryside boasts five famous 16th-century windmills, Consuegra.

While there are no direct flights from Madrid to Córdoba, one option is to take a short flight (1 hour 10 minutes) to Málaga or Seville, and then from either city take a train (1.5 hours) to Còrdoba.

This route is only recommended if you want to stop for a day or two in either of the two cities, because the airports are not convenient for getting to the train stations. Consider making a longer stop to see both of these Andalusian cities and go on a wine tour in Ronda as proposed in the 4th option in 7 Days in Spain: 4 Unique Itinerary Ideas.

In a mere week, you can enjoy the perfect family holiday in Spain. This...