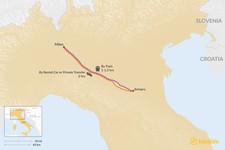 The distance between Milan and Bologna is only 123 miles (198 km). By far, the most convenient way to make the journey is by high-speed train. Italy's two train companies have direct trips departing every hour, which gets you to Bologna in one hour and fifteen minutes on average. Buy a ticket in advance or at the kiosk at the Milano Centrale station.

Another reliable option is renting a car and driving from Milan to Bologna, which only takes about 2 hours and allows you the freedom to stop at destinations like Parma and Modena. Check out this 5-day itinerary that starts and ends in Milan–making stops at the likes of Lake Como, Bologna, and Torino—or you can take advantage of a more extensive 15-day trip that explores the Italian Lakes.

You can purchase your train ticket and make necessary reservations in-person at the station, however, it is cheaper and more convenient to buy them online in advance.

The fastest driving route from Milan to Bologna will take 2.5 hours via A1 autostrada. After exiting Milan, stay on A1 toward Asse Attrezzato Sud for almost 2 hours until you take the Bologna Centrale exit off of A14 autostrada. Along the way, you can conveniently stop in Parma for famed Parmesan cheese and Parma ham, or visit Modena known for its Italian sports cars, famous Opera, and balsamic vinegar. If you have the time, take a more scenic route and spend time in Verona.

Hiring a private transfer is also an option versus renting a car. This form of transportation takes driving off your hands, is almost as quick as a high-speed train, and allows various pitstops at your leisure.