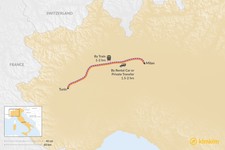 With only 45 miles (119 km) between the two cities of Milan and Turin (also known as Torino), taking the high-speed train is the most efficient mode of transportation. The two main rail companies in Italy have direct trains departing from Milan that get you to Turin in under one hour. Keep in mind that high-speed trains require making a seat reservation in advance upon booking.

While it’s not as fast, driving is another direct way to get to Turin. Whether it’s renting a car or getting a private transfer, driving lets you see the countryside up close. Also, if you have time, you can stop in historic cities like Novara and Vercelli along the way. If a tour is more your style, consider this 5-day Northern Italy trip that starts and ends in Milan, stopping at Lake Como, Bologna, and Turin along the way.

Duration: 1-2 hours (depending on whether you take high-speed or regional)

The journey from Milan to Turin is best taken on the high-speed train, which can get you there the fastest. Both Trenitalia (the national rail of Italy) and Italo (a privately run company) depart from Milano Centrale station and have direct routes going to Torino Porta Susa, which is Turin’s metro station. The high-speed trains, which Trenitalia calls Frecciarossa (FR), get you from Milan to Turin in under an hour, while the regional trains make multiple stops and take one hour and 40 minutes.

High-speed train tickets require you to reserve a seat in advance, which you can do online or at the train station before boarding. Regional trains do not require seat reservations.

While it takes longer than the high-speed train, the drive from Milan to Turin is straightforward and allows you to see the Tuscan countryside. After exiting Milan, merge onto A4 autostrada, a toll highway, and take that route for a little over an hour. Take the exit to Corso Giulio Cesare and a few turns later, you will be in the heart of Turin. The drive in total takes about one hour and fifty minutes.

Renting a car also lets you stop at destinations along the way, like the city of Novara known for its architecture and the historic city of Vercelli. If your budget allows, consider getting a private transfer that takes driving off your hands while still letting you take breaks at various places.