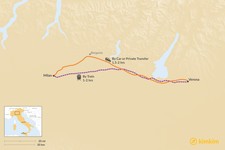 With a short distance of 85 miles (137 km), getting from Milan to Verona is a straightforward journey. Traveling by high-speed train is the fastest and most convenient way to get to Verona—taking just over an hour—letting you sit back and enjoy the pleasant views of the Lombardy region.

Renting a car is another quick option (though less relaxing when driving out of Milan, especially during rush hour). However, the autostrada route itself is straightforward and easy, while also allowing you to stop at cities like Bergamo and Brescia along the way. Consider this 15-day trip that begins in Milan and explores Italy's Lakes Region, including Verona.

The easiest way to get from Milan to Verona is by high-speed train. Trenitalia (the Italian National rail service) and Italo (a private rail company) trains start departing from Milano Centrale station as early as 6:15 a.m. for Verona Porta Nuova station, and they continue to run steadily throughout the day until well into the evening. The high-speed train—which Trenitalia calls Frecciarossa—takes as little as one hour and thirteen minutes to get from one station to the other, while the regional trains called Regionale or Regionale Veloce take one hour and fifty minutes.

Keep in mind that all high-speed trains include seat reservations while regional trains do not. If you're boarding a regional train on a busy travel day, you might have to stand for part of the journey. After arriving in Verona Porta Nuova station, you can take a 15-minute bus that transfers you to Verona Porta Vescovo to see another part of the city.

Driving to Verona only takes a little more time than a high-speed train and is fairly straightforward. After exiting Milan (which we advise consulting a map or GPS for), cruise down A4 autostrada, a toll road, that brings you past Bergamo and Brescia. Take the exit toward Brennero/Verona Nord to merge onto A22 autostrada, then take the Verona Nord exit. After that, you'll find yourself arriving in Verona in a matter of minutes. You can expect the total drive from Milan to Verona to be around 2 hours with light traffic.

Renting a car also allows for flexibility once you arrive in Verona. It takes one hour and 15 minutes to get to the city of Padua, known for its frescoes, and a one-hour and 30-minute drive to Stazione di Venezia Santa Lucia (Venice train station).

For those who have it in their budget, getting a private transfer is an easy and convenient way to get from Milan to Verona with maximal comfort along the journey. For the 2-hour car ride, you can gaze out over the Lombardi region and stop along the way as you please.

Mountains and Lakes in Northern Italy: The Dolomites, Lak...

Spend 15 days traveling through the dramatic Dolomites in Northern Italy...

Explore the best of Northern Italy on this 5-day trip to Milan and Lake...