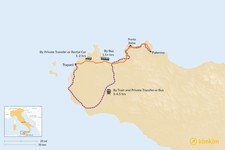 Once you've taken in the earthy, vibrant Sicilian capital of Palermo and are ready to head to the beaches and Baroque wonders of Trapani, there are several ways to make the 70-mile (110 km) trip. Driving or taking a private car transfer is the fastest and most practical option, or you can reach Trapani from Palermo by a combination of train and bus.

Hiring a private driver is a particularly comfortable option for getting between the two cities, though doing this route as part of a longer self-drive trip is also a good option. From central Palermo, drivers pick up the A29 Autostrada (also signposted E90), a toll road, and travel 45 miles (72 km) north, then west along the coast to where the A29/E90 meets the E933 near Alcano. From that intersection, it's another 25 miles (40 km) on the E933 into Trapani.

An inland route along smaller, SS-signposted roads passes through Partinico before picking up the E933 at Alcano. At 63 miles (100 km), this route is slightly shorter but may take longer because you'll mostly be traveling on two-lane roadways.

Consider this 14-day self-driving tour of Sicily, which include Palermo and Trapani, and a ferry trip to the Egadi Islands.

By Train and Private Transfer or Bus

To travel from Palermo to Trapani by train, the shortest route, at 2 hours 50 minutes, involves taking a Trenitalia train to Punta Raisa, (which is also the location of the Palermo Airport). Trains to Punta Raisa run every 30 minutes Monday-Saturday, and hourly on Sundays and holidays, and take between 50-70 minutes. From the airport, take a private transfer the rest of the way to Trapani (there are also buses to Trapani every 1-2 hours).

A cheaper, but more time-consuming option is to take the same Trenitalia train in the direction of Punta Raisa, but detrain at Piraineto. From there, you can take one of three daily trains to Trapani. Because these trains stop at several smaller towns along the way, this leg of the trip takes 3 hours versus the 70-minute bus ride from the airport.

AutoServizio Salemi runs several daily buses (fewer on Sundays and holidays) between Palermo's Piazza Cairoli, adjacent to the main train station, to Trapani Birgi Airport, 1.5 hours away. From the airport, you would need to take a taxi to Trapani.