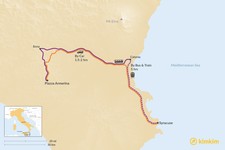 Piazza Armerina, Sicily, famous for its mosaic-filled, 4th-century CE Villa Romana del Casale, is a worthwhile side trip from Syracuse. The roughly 87-mile (140 km) trip is best made as a two-hour drive in a rental car or with a private driver, with an option to stop in small Sicilian towns along the way.

Bus and train routes are also available, but not recommended—whether you take a train and bus, or go by bus the entire way, the trip will take about five hours.

If you want to avoid the Autostrada, you can stick to small provincial and state roads (indicated as SP or SS), which pass through numerous small towns and plenty of open countryside. These routes add about 20 minutes to your trip time. This self-guided road trip of Sicily's east coast includes a guided tour of the Villa Romana del Casale and an overnight in Syracuse.

If your budget allows, hiring a private driver is a more comfortable option for getting between the two cities, often offered as part of a tour that includes the Villa Romana

If you don't want to drive in Sicily or you want to save some money, you can reach Syracuse from Piazza Armerina by bus or with a combination of buses and trains. Buses operated by SAIS Autolinee travel from Piazza Armerina north to Enna. From there, you switch to a SAIS bus to Catania Airport. At the airport, frequent AST buses run to Syracuse. Another route takes passengers from Enna to Catania Centrale train station, where they can catch a Trenitalia train to Syracuse.

The third and least costly option is to take a twice-daily AST bus from Piazza Armerina south to Caltagirone, then catch another twice-daily bus from there to Syracuse. The travel time is about the same for all routes, at roughly 5 hours. When searching schedules or departure boards, remember that Syracuse is written as Siracusa in Italian.

Embark on the trip of a lifetime with a visit to not one but two of...

You can do a lot with the traditional two-week vacation. Case in point,...

In a little over two weeks you can enjoy comprehensive tours of southern...