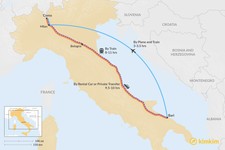 The region of Puglia and Italy’s Lakes District—which includes not only the famed Lake Como but also Lake Garda, Lake Maggiore, Lake Lugano, and Lake Iseo—are approximately 600 miles (967 km) from each other. The quickest way to get between the two regions would be a combination of air and train travel, which takes a total of about 3.5 hours, depending on transfers. Puglia’s capital city of Bari has daily flights to Milan, and from there you can take a train to Lake Como.

The second fastest route to get from Puglia to the Lakes District would be via train. Traveling by rail will take anywhere from 8-11 hours, depending on connections, and you can expect at least two transfers during the trip.

Driving is the slowest route between the two regions. While it can take upwards of 10 hours to drive from Bari to Lake Como, it does afford you the opportunity to see more of Italy and potentially explore other cities along the way.

When visiting Puglia, consider this 7-day tour of the region, which includes visits to Lecce and Bari, as well as a food tour in which you prepare an authentic Pugliese meal.  And this tour of Milan and the Lakes District showcases the top sights in Milan, Lake Como and Lake Garda, as well as tours of the cities of Bellagio and Verona.

It’s a quick 1.5-hour flight from Bari to Milan, and there are several nonstop flights a day between cities. Upon arrival in Milan’s Malpensa airport, you will take the Malpensa Express train that runs between the airport and Milano Centrale rail station. The Malpensa Express has trains departing every 30 minutes and travel time from the airport to the train station is about 50 minutes. From Milano Centrale, you can catch one of the several nonstop trains to Lake Como’s Como S. Giovanni station, which takes about 35 minutes.

Trains run regularly between Puglia and the Lakes District, with numerous routes to choose from. The fastest train takes just over 8 hours, and there are several other options with transfers that can add on another hour or two. From the city of Bari you'll take the train to Milan, and then catch one of the daily trains that run between Milan and Lake Como.

There are also trains from Bari that will take you through cities such as Bologna, with transfers to Milan and then to Lake Como. Most of the trains also offer some kind of food service, from snack carts to full bar/buffet cars, but you may want to pack some snacks on your own as well.

The drive from Bari to Lake Como is about 9.5 – 10 hours, with consideration for factors such as road conditions, tolls and construction. From Bari, you’ll take SS16 and then get on the A14, which takes you along the coast and eventually to SS340 into the Lake Como region.

This route takes you through the province of Pescara, where you can visit the childhood home of poet Gabriele D’Annunzio, as well as the city of Bologna, where you can stroll the Piazza Maggiore and enjoy a leisurely lunch. You can also take an alternate route which goes through Naples via SS16 and A14, connecting to the E45. This route is quite a bit longer at 11.5 hours, but gives you the option of exploring Naples and possibly Florence along the way.