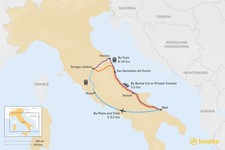 Puglia, a region on Italy’s Adriatic Coast, is approximately 345 miles (556 km) from the region of Umbria. The easiest way to get from one to the other is by combining plane and train travel. Puglia’s capital city of Bari does have an airport, but service to other cities is fairly limited, so flying from there to Rome and then taking the train into Umbria is the quickest route.

Driving, which takes about 5.5 hours, would be the second fastest option. The drive from Bari to Perugia, which is Umbria's capital city, takes you along the coast and offers fantastic views of the Adriatic Sea, as well as the chance to stop in and check out some of the towns and villages along the way.

The slowest mode of travel between the two regions is by train. While there are daily trains between Bari and Perugia, all require at least one or two transfers, so you can expect a full day of being on the train if you choose this route. Travel time is between 8 – 10 hours, depending on connections between cities.

While in Puglia, consider this 10-day tour, which takes you through the cities of Alberobello and Lecce. Umbria, while not as well-known as nearby Tuscany, is considered a hidden gem by many. This tour touches on some of the perks of traveling to Umbria in June, when prices tend to be lower and you can explore towns such as Assisi and Spoleto.

There are several daily nonstop flights from Bari to Rome, with flying times of just over an hour. After arriving at Leonardo Da Vinci airport in Rome, you can take the express train, known as the Leonardo Express, from the airport to Termini Station. The express train takes about 30 minutes, and the train from Termini Station to Perugia takes 2.5 – 3 hours, depending on transfers. There are a few nonstop trains between Rome and Perugia, but most have at least one connection.

From Bari, you’ll take SS16 to A14 and SS77, then to SR316 into Perugia. The highway takes you along the coast and through towns such as the fishing village of Termoli, with its historic old town area and Termoli Cathedral. You may also want to stop in at San Benedetto del Tronto, a city located in the Marche region and about 3.5 hours into the drive. One of the most populated cities along the Adriatic coast, it has plenty of restaurants and shopping along a lovely promenade.

Trains run regularly from Bari Centrale train station that can take you to Umbria, however there are no nonstop trains between the two regions. Most require at least two transfers at different stations. In order to break up the trip, you could disembark at one of the transfer points, such as the city of Ancona, and explore that area. Ancona is known for is beaches as well as its historic Piazza del Plebiscito area. After spending some time in Ancona or another city along the way, you could continue on and arrive in Umbria later that evening. If your schedule allows, you could even opt to overnight at one of the connecting cities, and resume your journey the next day.