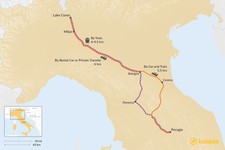 Umbria is located approximately 350 miles (564 km) from Italy’s Lakes District. When traveling from one region to the other, the quickest way to get there would be to go by train, which takes a total of about 4.5 hours. There is regular train service between Perugia, Umbria’s capital city, and Milan, connecting through the cities of Florence and Bologna. Once you get to Milan, you’ll be able to catch the train to Lake Como’s Como San Giovanni station.

The second fastest option would be a combination of driving and taking the train. The drive from Perugia to Milan is about 4.5 hours. When you arrive in Milan, you can take one of the many trains that run from Milano Centrale train station to Lake Como. Traveling exclusively by car takes about six hours without stops. The main driving route does take you through the cities of Florence and Bologna, both of which make great stopping points.

The Lakes District, which includes not only Lake Como but four other major lakes, also has an abundance of history, architecture, and delicious cuisine. This 12-day tour of Milan and the Lakes region takes you through Milan, as well as visits to Lake Como, Lake Maggiore, and Lake Garda.

From Perugia, there are several daily trains to Milan. The majority of the trains require at least two connections, usually in Florence or Bologna, and travel time is about four hours. Once you get to Milan, the trains to Lake Como depart about every 15-20 minutes and take around 35 minutes. Train tickets can be purchased online or at the station, and most of the trains offer some kind of food service, which varies from a full dining car to snack carts.

The drive from Perugia to Milan takes about 4.5 hours, traveling on the E45 to the A1 to Viale Lucania. The trip is a fairly straight shot, but you may want to stop to stretch your legs along the way. You’ll pass through several cities, including the bigger cities of Florence and Bologna, as well as smaller towns like Cesena, which is near the coast and has a lovely piazza to stroll in and sights such as the Rocca Malatestiana castle. Once you reach Milan, you’ll head to Milano Centrale train station and take one of the several daily trains to Lake Como, which takes about 35 minutes.

Driving from Umbria to the Lakes District takes a total of about 5.5 – 6 hours. From Perugia, you’ll take the E45 and the A1, then continue on SS340 to Lake Como. Keep in mind these highways do have tolls, and there can sometimes be construction that will slow traffic.

If you want to break up the trip, consider a stop in Florence or Bologna for a few hours (or days!). In Florence, you can visit the Duomo or go to the Galleria dell ’Accademia where Michelangelo’s statue of David is displayed. Or you can tour Bologna, where you can walk the Piazza Maggiore and visit the Basilica di San Petronio cathedral.