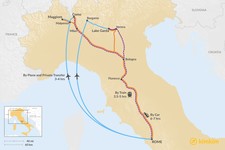 Italy's famed lakes district lies at the country's northern border, approximately 325 miles (523 km) north of Rome. The best-known lakes of Maggiore, Como, and Garda are scattered across the Lombardy region, easily reachable from the capital in a half-day of travel.

The train is the best way to make the trip, with a straightforward combination of express and regional lines arriving at most of the central lakeside towns like Como and Lecco in under four hours.

Flying an alternative option, with non-stop service from Rome to Milan’s Malpensa and Bergamo airports. Flight time is just over an hour, but early check-in, transport to the airport, and a further hour’s drive north to the lakes mean overall the journey is slower and more complicated than by train.

Driving is a full day's endeavor, but worth considering if the lakes are part of a wider itinerary. The drive from Rome takes about six hours, and travels through the heart of central Italy’s countryside and allows for stopovers or scenic side-trips throughout Umbria, Tuscany, and Emilia Romagna.

Upon arrival, ferries are the best way to explore the lake district’s highlights, conveniently connecting the popular lakeside towns, villas, and gardens. Read more about the area’s highlights with our Ultimate Guide to the Italian Lakes, and plan your route with our seven and ten-day itineraries.

Trenitalia’s direct, high-speed Freccebianca line connects Rome Termini to Milan Centrale station in 3 hours. From there, it’s easy to connect with regional Swiss and Italian lines which head north toward the lakes.

The region’s main train lines travel up the eastern shore of Lake Como, reaching Lecco and Varenna in under an hour, and to the west towards Como San Giovanni (40 minutes). For those heading further west towards Lake Maggiore, trains arrive at Varese and Stresa in about an hour.

If the far eastern Lake Garda is your main destination, Verona is a quicker connection than Milan. Frecce trains reach the city’s Porto Nuova station from Rome Termini in under 3.5 hours, and from there it’s a 30-minute taxi or bus ride to Sirmione at the lake’s southern shore.

Tickets for the Rome-Milan leg of your journey should be booked ahead of time for the best availability and prices, while regional tickets can be purchased at the station.

By Plane and Private Transport

Non-stop flights from Rome's Fiumicino (FCO) serve two of Milan’s major airports. To the west, Milan Malpensa (MXP) is closer to Maggiore and the western branch of Como, while Milan Bergamo (BGY) is a better choice for access to Como’s eastern shore and Lake Garda.

Fiumicino (FCO) airport is about 30 minutes outside the city and reached via the efficient Leonardo da Vinci express train or taxi. Flights to Milan take just over an hour, and from there the journey towards the lakes takes under an hour by car.

Neither airport has direct rail links to the lakes, so it’s fastest and easiest to arrange for a taxi or private transport upon arrival. Varese, Como, and Lecco are all under an hour’s drive from Milan Malpensa, while Sirmione and Peschiera del Garda are under an hour from Milan Bergamo.

Renting a car and driving approximately 400 miles (650 km) from Rome to the lakes district takes a full day, passing through the scenic countryside of Umbria, Tuscany, and Emilia-Romagna. While this is one of the slowest ways to reach the area, it provides excellent opportunities for sightseeing and stop-overs along the way, with Bologna and Modena both near the half-way mark.

Routes vary depending on the destination, but the majority of the drive is on the A1/E35 autostrada which heads north from Rome to Milan, skirting Florence and Bologna on the way.  From there, choose the A9/E35 to head northwest towards Como, or the A51/SS36 to travel northeast to Lecco and Varenna. The fastest route to the far eastern Lake Garda is to head north on the A1/E35 then take the E45/A22 towards Verona.

Driving out of Rome can be stressful, so renting a car from a location to the city’s north (like Villa Borghese) is a good way to avoid urban traffic and restricted ZTL zones. Upon arrival at the lakes, it’s easiest to park in public lots on the outskirts of towns, and use ferries to make short journeys within the area.