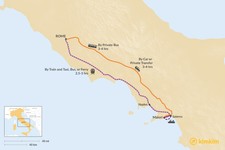 Maiori is connected to the rest of the Sorrento Peninsula by road and, in peak travel months, by boat, making it an excellent place to stay if you want to visit several Amalfi Coast towns. To get from Rome to Maiori, you can either take a combination of trains and buses or ferries, drive a car, or pay for a direct bus from Rome or a private driver. Air travel is not a good option, as the closest airport is in Naples, which is just about halfway between Rome and Maiori.

Because Maiori is located on the popular Amalfi Coast, getting there can be challenging during the summer months. There are only two winding roads connecting Maiori to the rest of the world, and visitors often find themselves waiting in long traffic jams while negotiating the twists and turns of Strada Statale 163 (SS163), the state road from Vietri sul Mare to Maiori.

Pack light; you will be charged an extra bag fee on a bus or ferry if you have more than one suitcase and one carry-on bag. Large suitcases can be problematic, too—you may have to pay an oversized bag fee if you use one.

By Train and Taxi, Bus, or Ferry

One of the easiest ways to get from Rome to Maiori is by train and public bus or ferry. Take a Trenitalia or Italo train from Rome to Salerno. This part of your journey will take about two hours.

To find the ferry offices, walk across Piazza Vittorio Veneto to Via Clemente Mauro. This street dead-ends at Piazza Concordia, where the Travelmar and Cooperativo Sant'Andrea ferry docks are located. During peak travel season, buying ferry tickets in advance online is your best bet.

Ferry service to Maiori is only available during the tourist season (April through October); in winter and early spring, the SITA bus is the most affordable option.


By Car or Private Transfer

The most expensive way to get from Rome to Maiori is by private transfer. Most private drivers leave either from Leonardo da Vinci Airport (Fiumicino) or from Rome's two main train stations, Termini and Tiburtina.

If you drive your own car, be aware that you will encounter heavy traffic during summer and on weekends. In theory, the drive should take about four hours, but traffic backups could add several hours to your trip. The road to Maiori is steep and narrow; if you have a manual transmission car and are not skilled at driving on hills, taking the train or bus might be a better option for you.

Maiori has a Zona a Traffico Limitato (limited traffic zone), or ZTL, in place during high tourist season. If you drive your car into the ZTL, you will get a ticket unless your vehicle's license plate number has been added to the list of cars permitted into the zone. Should you decide to make the drive, allow plenty of time and prepare to pay tolls.

The easiest way to drive from Rome to Maiori is to take Via Casilina to the A90/E80, which is the Grande Raccordo Anulare (G. R. A.), the highway that encircles Rome. Exit onto the A1 Diramazione (A1DIR)/E821. This highway joins the A1/E45 at San Cesareo. Continue on the A1/E80 to the A30/E841, which branches off from the A1 near Caserta.

Take the A30/E841 toward Fisciano. Head south on the A3/E45. This highway meets the A3/E45 outside of Salerno. Head toward Vietri sul Mare, not Reggio Calabria, on the A3. Leave the A3 at the Vietri sul Mare exit and drive through Vietri on Via Costiera, or SS163. Continue on SS163 to Maiori.

You can save time and money if you detour to the A3 through Nocera Inferiore, but you will be driving on local roads, not highways. Be sure to have your GPS handy if you want to take this short cut.

Remember that Italy's toll highways use the Tutor average speed camera system to enforce speed limits. To avoid getting a ticket (or several), always drive at or below the posted speed limit.

From April through October, Maiori Shuttle runs private buses and shuttles from Leonardo da Vinci Airport (Fiumicino) and Rome's Tiburtina train station to Maiori. This is an expensive option, but you can relax on the bus and let someone else deal with driving on the coast road. The journey takes about four hours, depending on traffic.

Leonetti offers private bus service between Rome's Tiburtina station or Leonardo da Vinci Airport (Fiumicino) and Salerno. Leonetti buses are much less expensive than the Maiori Shuttle, but you will still have to make your way from Salerno to Maiori as described above. The bus trip between Rome and Salerno takes about three hours from the train station and four hours from the airport.