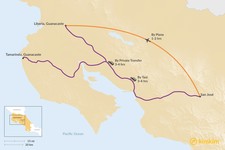 Guanacaste is a large province that borders Nicaragua and makes up part of the Nicoya Peninsula. Its home to several towns and national parks but Liberia, the capital, is a good starting point and easily reached from San José. The hour ride by plane is by far the quickest and easiest means of travel.

Private transfer to Liberia will take you along 130 miles (210 km) for roughly three to four hours. Route 1, the main highway, is a modern, high-speed toll road. This province has so much to enjoy and with your own car, you can head any place you'd like. Here's a helpful guide with ideas and tips for your travels to the region.

While private transfer gives you the ultimate convenience and freedom, booking a taxi is also a feasible choice. The San José to Liberia route is a popular one and this way you're not limited to any timetable or scheduled destination. Taxi stands can easily be found throughout the city or your accommodations can book one ahead of time for you.

Take the short plane ride from San José's Juan Santamaria Airport if you want to get to the Province quickly. It's an easy journey and allows for more time exploring the places you want to see around Guanacaste. The flight is under an hour but tack on extra time for travel to and from the airports. You'll land at Liberia Airport which is a few miles out of the city center. By using Liberia as a home base, you can easily travel onward by bus, taxi, or hired car to get where you want to go.

Traveling by car takes longer but you'll really get to see the beauty and diversity of the Guanacaste Province. Using Liberia as a hub is helpful for determining travel times but with your own car and driver, you can head straight for your destination of choice. The beach towns of Tamarindo and Flamingo are popular areas as is the national park of Volcan Tenorio. Keep in mind, if you go off the beaten path in certain seasons, bad road conditions may mean longer driving times.

San José is a large city so you'll have no problem locating a taxi, especially at the airport or bus terminals. It never hurts to book ahead and research a reputable company with licensed drivers. There are public buses to Liberia but unless you have a specific destination in mind, you'll spend most of your time in transit. Go by taxi instead (or use a combination of the two) and you'll cover more ground on your own schedule without the crowds and wait.

C
Connor G.
Texas, United States
"Our trip was great and Adriana was extremely responsive and helpful with all our requests! Amazing time in Costa Rica! " read more
Traveled to Costa Rica as a couple in August, 2021

Andrea W.
Illinois, United States
"Randall was amazing at planning our trip to Costa Rica! He was able to incorporate all of the activities we wanted and was very quick to make adjustments to ..." read more
Traveled to Costa Rica as a group in July, 2021
Create your custom-made trip to Costa Rica
Get Started