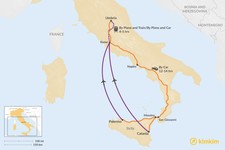 The overland distance between Sicily and Umbria is about 540 miles (870 km). The fastest route between the two regions involves a combination of air travel and train. Including the transfers and layovers from plane to train, the trip from Sicily’s main cities of Palermo or Catania to Umbria’s capital city of Perugia will take about four to five hours. You can also combine flying with driving, which, depending on traffic, takes about the same amount of time as the train.

Driving from Catania or Palermo takes upwards of 13 hours, which sounds long but also provides the opportunity to explore more of Italy’s countryside, as well as the possibility of overnighting along the way.

While in Sicily, a road trip around the coast showcases the island’s beautiful beaches, as well as local markets and ancient archeological sites. The region of Umbria, which borders Tuscany, has a rich history of food, culture, and art, and this guide to the area showcases some of its most popular attractions.

The most direct flying route from either Palermo or Catania would be to take one of the several nonstop flights to Rome. Flying time from Palermo is about an hour, and the flight from Catania is about 1.5 hours. Once you arrive in Rome’s Leonardo da Vinci Airport, you’ll find the Fiumicino Aeroporto rail station within the airport terminal, making for a convenient transfer.

Train tickets can be purchased in advance or at the station, although purchasing at the station tends to be more expensive. Train service from Rome to Perugia takes approximately three hours and there are multiple trains running daily.

After the fairly quick flight from Palermo or Catania to Rome, you can rent a car right at the airport and head out of the city. The most direct driving route is via the A1 and E45, which is about 109 miles (175 km) and takes about three hours with consideration for the often-heavy traffic. Hiring a private car is also an option, and may make for a more relaxing drive, as getting out of the city can be hectic.

Driving from Sicily to Umbria takes about 12 to 13 hours, depending on the route you choose. The shortest route would be to depart from Catania and head to Umbria via the E45, which includes a 30-minute ferry crossing at Villa San Giovanni – Messina. Leaving from Palermo takes about 14 hours, traveling via the E90 and making the same ferry crossing before continuing on the E45.

The drive takes you right by Naples, and at just about eight hours driving time from Sicily, it can be a great stopover point to break up the trip. While in Naples, you can explore historic Castel dell’Ovo, the oldest castle in the region, or take a tour of the underground tunnels that sit below street level. Naples is also considered the birthplace of pizza, so enjoying authentic Neapolitan pizza shouldn’t be missed.