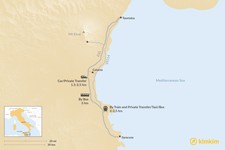 Self-driving is the most convenient way to travel the 120 miles (193 km) between Syracuse and Taormina, especially for travelers who plan on venturing beyond the two towns into nearby Mount Etna or Catania. When looking at a map, you will see that the route between the two is practically straight.

The choice of whether to rent a car or not depends on how much time you choose to spend in Sicily. Taormina is a pedestrian-only city for the most part and those who plan on spending the trip lounging on its seashore should avoid the cost burden of a parked card.

Because it's a major beach city, train and bus frequency to Taormina is increased during the summer, making travel with public transportation very convenient during this season.

Because Sicily's points of interest are rather far apart from one another, a car comes in handy when traveling across the island and it is recommended to rent one. Moreover, Mount Etna and Catania are both located between Syracuse to Taormina so a detour into either is rather simple. This 16-day Spectacular Self-Drive Tour Around Sicily includes tricks on driving from one city to the next and includes Palermo, Trapani, Sciacca, Agrigento, Modica, Syracuse and Taormina on its itinerary.

For those planning on staying in Taormina without including journeys into nearby attractions, do note that the majority of the town is pedestrian-only and parking is rather pricey, starting at $4 per hour. Three convenient options to park are the Lumbi, Garage Porta Catania and Porta Pasquale parkings. The first, Lumbi, offers a complimentary shuttle from the parking to Piazza S. Pancrazio.

By Train and Private Transfer/Taxi/Bus

Train travel run by the national train operator Trenitalia is a convenient option for travelling between Syracuse and Taormina. When purchasing the ticket, make sure to specify the stations' Italian names, 'Siracusa' and 'Taormina-Giardini'. You have two train options to select from with similar travel times (2-2.5 hours): the Intercity or the Regionale.

Tickets for both options and tariffs for the Regionale are fixed, so there is no need to book in advance. Make sure, however, to validate tickets purchased at the station by stamping them at one of the available machines (which are usually white and green) on the walls of the station, or otherwise run the risk of getting a fine.

Because Taormina shares its train station with the nearby town of Giardini-Naxos, travel by train does not get you right into the city center. You can either book a private transfer or a taxi (10 minutes) or take the bus (10-20 minutes) from the station.

If you choose to take the bus, take local operator Azienda Servizi Municipalizzati's Linea Verde from the station in the direction of Madonna della Rocca, which runs until about 7:00-7:30 pm (hours may vary by day of the week and season).

The regional Interbus operator runs a direct route between Syracuse and Taormina. Prices are similar to the train. In Syracuse, take the bus from Corso Umberto 196. Drop-off is at Taormina's Via Pirandello. Once in Taormina, you can book a private transfer or taxi to the city center (10 minutes), walk (25 minutes), or take the Linea Verde local bus (10-20 minutes).