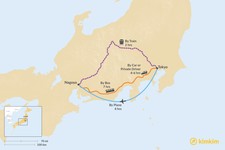 There are several ways to make the 217-mile (350 km) trip from Tokyo to Nagoya, including by train, road, and air. Traveling by train is fastest and most efficient, but if you want to visit Mount Fuji, Hakone, or the Izu Peninsula, renting a car or arranging for private transfer is a better option. Air and bus travel, while possible, both take longer than the rail journey.

Some of Japan's best-loved sights lie directly between Tokyo and Nagoya. Fuji Hakone Izu National Park is your gateway to Japan's most famous peak, Mount Fuji, the beauties of the Izu Peninsula, and Hakone's onsen, or hot springs. If you stop in Hakone or one of the towns on the Izu Peninsula, consider staying in a ryokan (traditional Japanese inn). You'll need to plan ahead if you want to climb Mount Fuji, as hiking trails and mountain huts are officially only open from July through mid-September.

Fast shinkansen (bullet) trains take you from Tokyo to Nagoya in just under two hours. The Nozomi, Kodama, and Hikari shinkansen lines all connect Tokyo with Nagoya. If you are traveling with a JR Pass, keep in mind that your pass is not valid on Nozomi line trains. Local train are also available, but take longer.

Duration: 4-6 hours, depending on traffic

In theory, the journey from Tokyo to Nagoya should take about four hours. If you hit the road during peak travel times, expect to spend an hour or two more on the expressway. Ideally, you should time your journey so that you leave Tokyo in the early morning, when commuters are traveling toward the city. The fastest, most direct route involves four toll highways, the Tomei, Shin Tomei, Mei-Nikan, and Nagoya Expressways.

Flights leave both Narita International Airport and Haneda Airport for Chubu Centrair International Airport several times per day. If you decide to travel to Nagoya by air, be sure to choose a nonstop flight, or you could find yourself spending two or three extra hours flying around Japan.

JR Bus Kanto offers bus service to Nagoya twice per day from JR Tokyo Station. Leave the station by the Yaesu Exit (the train station's south exit). The Bus Boarding Dock is ahead and to the right as you leave the station.

Mt.Fuji, the highest volcano in Japan, and the surrounding lakes known...
Getting Around Japan

Take a walk through time on this 10-day self-guided tour of the...

On this two-week journey to the four corners of Japan's main island,...

Eat your way through the Land of the Rising Sun on this immersive...

Venture beyond the major cities with this 10-day adventure through...

On this scenic trip, you'll visit two of the largest cities in Japan:...

Perfect for active walkers, this trip combines a four-day walk on...