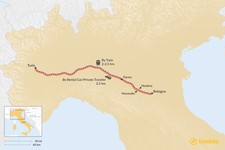 The journey from Turin (Torino) to Bologna takes visitors from the Piedmont region of Italy south into the Emilia-Romagna, across fertile lands edged by mountains. The trip covers 205 miles (331 kilometers) and is best accomplished by rental car, private car transfer, or train.

Rental cars are easily available in Turin, which will allow you the freedom to sightsee along the way to Bologna. Hiring a car and driver by the hour is another option that allows you to meander along with stops; our local specialists can help you make a private car booking that matches your needs. Flying domestically isn't practical, as there are no direct flights between the two cities.

Consider this five-day Explore Northern Italy from Milan tour, which includes visits to both Turin and Bologna, as well as Milan and Lake Como.

Trenitalia Frecce runs trains between Turin and Bologna every hour, which take about 2 hours and 10 minutes. ItaloTreno runs trains every four hours, which take about 2.5 hours for the trip. Catch the train in the center of Turin at Turino Porta Susa and it will take you to Bologna Centrale, also right in the heart of the city. That scenic route makes it easy to transfer to the stations from your hotel, which is likely to be near the bustling areas of each city.

Rent a car from one of the major companies in Turin and plan to spend 3.5 hours driving, if you don't choose to stop. But we'd advise taking your time, as Parma and Modena are on the way, places where famous foods like Parmesan cheese, Parma ham, and balsamic vinegar originated. And if sports cars really get you revved up, make a slight detour south of Modena to visit the Ferrari Museum in Maranello where those iconic cars are built. You can even take a shuttle bus tour around the factory and its famous test track.

Letting someone else do the driving between Turin and Bologna means you don't have to deal with navigating Italian roads or parking. Plus you're free to see the sights along the way. You can hire a car by size, choosing a standard vehicle, a luxury sedan for added comfort or a van, allowing for a larger group to travel together. Our local specialists can help you decide whether to book by the trip or by the hour. Booking by the hour gives you the flexibility to stop and visit a few sights along the way, like the ones described above.

This 8-day trip is perfect for travelers who want a packed itinerary but...

Enjoy some of Italy's finest food and wine with this 5-day trip to the...

Discover Northern Italy's Piedmont region and the Italian Riviera during...