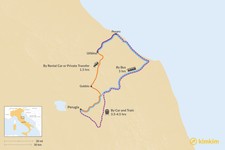 The cities of Urbino and Perugia are approximately 70 miles (113 km) from each other. The walled city of Urbino is located in the Marche region of Italy, and Perugia, the capital of Umbria, is located in central Italy. Driving via rental car or private transfer takes about 1.5 hours, making it the quickest way to get from one city to the other.

The second fastest route would be to combine driving and rail service. While Urbino does not have a train station, it’s a quick 40-minute drive from there to nearby Pesaro, where you can catch a train to Perugia. The majority of the train routes include at least two changes, with a travel time of anywhere from 3 – 4 hours, depending on transfers.

You also have the option of taking a bus, which can take upwards of five hours. While this is the slowest way to get between the two cities, bus service is usually comfortable and reliable.

This tour of 6 Hidden Hill towns showcases not only the Palazzo Ducale and Urbino’s Renaissance art collections at the Galleria Nazionale delle Marche, but also other cities such as Spello and Asolo. When you reach Perugia, check out this Ultimate Guide to Umbria, which offers the experience of sampling the cuisine of the region and seeing sights such as Perugia’s main square, Piazza IV Novembre, as well as the Nobile Collegio del Cambio.

Leaving Urbino, you’ll take Via Cesare Battisti, eventually connecting to E78 and SS73bis to SS318. The drive takes you through the town of Gubbio, which is about 40 minutes from Perugia and a great place to explore sights such as the Palazzo dei Consoli, or the historic Roman church, the Basilica of Sant’Ubaldo.

The drive from Urbino to nearby Pesaro is about 40 minutes, traveling via SP423 and connecting to SS16 into Pesaro. The Pesaro train station is located at Piazzale Giovanni Falcone e Paoelo Borsellino, south of the city center. Tickets can be purchased in advance or at the station, with advance purchase recommended. Most of the routes have at least two transfers, with stops in Ancona or Falconara, as well as Foligno. Depending on the train you choose, you can expect a travel time of 3 - 4 hours.

The main bus station in Urbino is located at Park S. Lucia, with buses that will take you to Pesaro and then to Perugia. The bus from Urbino to Pesaro is about an hour, and once you arrive at the station in Pesaro, you’ll catch another bus to Perugia. Most of the routes from Pesaro to Perugia require at least one transfer. Make sure to always check the bus routes and dates, as some do not run daily. While bus service isn’t the most convenient way to travel between the cities, most of the buses are comfortable and it does offer a chance to see some of the countryside.

Step off the beaten path and discover some of central Italy's hidden...

This leisurely 9-day itinerary introduces you to the medieval hill towns...

Skip the crowds on this packed 6-day jaunt through Italy’s lesser-known...

This relaxed 10-day itinerary gives you plenty of time to discover the...

Avoid the crowds and explore Italy's quieter central regions on this...