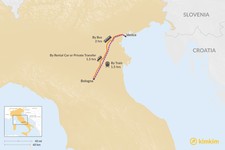 Traveling the 97 miles (155 km) between Venice and Bologna can be accomplished via train, rental car, private driver, or bus. For most vacationers, the train makes the most sense, as you can go from the heart of Venice at the Stazione di Venezia Santa Lucia directly to Bologna's Centrale Stazione in about 90 minutes, bringing whatever luggage you desire.

Using a rental car means more freedom, but to rent a car in Venice, you'll need to make your way to the Ponte della Libertá close to the cruise ship passenger center to pick up your car. All are located just as you leave the island (and you won't be able to drive the car into the city), so plan to do this as you are on your way to Bologna. Using a car service to make the trip also means taking a vaporetto (water taxi) to a stop in this same area, where the driver will pick you up. Either way, the trip is about 90 minutes.

Leave all the planning to us—and eat and drink to your heart's content—with this Food & Wine in Italy 14-day tour. You'll enjoy both Venice and Bologna, as well as Florence, the Amalfi Coast, and Rome.

Trains run hourly all day between Venice and Bologna from Stazione di Venezia Santa Lucia directly to Bologna's Centrale Stazione. The scenic trip takes about 90 minutes, but be sure to check the timing of your train, as some trips run more locally and can take up to two hours.

Using a rental car that you must pick up at the edge of the Venice city center means you'll be able to explore the sights of the Emilia-Romagna region along the way toward Bologna, including a stop at the Parco Regionale Veneto del Delta del Po. That nature park sits right on the Adriatic Sea, where the Po River forms a delta to the sea and is filled with wildlife ranging from birds, turtles, and lizards to foxes and nutria.

Parma, made famous for the production of Parmesan cheese and Parma ham, is an easy side trip, too, and a place to sample those delicious foods in one of the city's numerous restaurants. And if you love seeing beautiful cars as much as you love driving, then a stop at the Ferrari factory and museum in Maranello, just outside of Modena, where the world's best balsamic vinegar is made, is also a must-do.

Hire a car and driver by the hour and take a leisurely trip south, going directly to Bologna in 90 minutes. Or ask the driver to take you to one of the places described above; you can add in stops to a few of the numerous wineries that dot this part of the Emilia-Romagna, known for their sparkling white wines like Lambrusco as well as crisp whites and hearty reds.

Taking the bus from Venice to Bologna is probably the least expensive way to travel—but it will also take the longest, as most of the buses that run this route take about two hours to make the trip. To catch the bus, start at either Venice Tronchetto or Venice Mestre (Stazione FS) bus station; it will take you to the Bologna central bus station. Buses often restrict how much luggage you can bring aboard, so if you are traveling with more than one suitcase, you'll find yourself hit with an extra charge—or even left at the curb if there isn't enough space in the cargo hold.