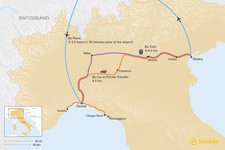 Taking the train is another efficient option that avoids the stress of navigating as well as dealing with traffic. The train leaves from Venice for Genoa station, but keep in mind that there's only one direct high-speed train on the daily schedule. Otherwise, you can take one of the many regional trains that require at least one transfer, and once you've arrived take this 13-day tour that brings you around the Italian Riviera, including the iconic Cinque Terre.

Duration: 4 hours and 20 minutes (depending on traffic)

Renting a car is a smart way to get from Venice to Genoa as well as the rest of the Italian Riviera. Plus, it allows for sightseeing in noteworthy cities and towns on the way to the Liguria region. After exiting Venice, take multiple autostradas (or toll roads): A4 to A21, then take A7 and merge onto A12. From there, exit off of Genova Est and arrive in the city, with a total drive of 4 hours and 20 minutes nonstop. But if you do choose to stop to sightsee, Padua, Verona, and Cremona are along the way.

Once you arrive in Genoa and explore the city, start your journey around the Italian Riviera. West of Genoa is the historic city of Savona that takes 55 minutes down A10 autostrada, or you can keep heading toward the French border to hit Sanremo, a coastal city filled with palm trees and olive groves. East of Genoa lies an abundant amount of colorful villages—Cinque Terre to Riomaggiore, to name a few—all of which are accessible by driving down A12 autostrada.

If your budget allows, book a private transfer for a more laidback experience. You can sit back and watch the coastal views without worrying about the navigating part, and your driver can give advice on which towns and cities to see along the Italian Riviera, depending on your interests.

The high-speed train from Venice to the Italian Riviera is a direct trip that involves plenty of scenic window views. Trenitalia, Italy's national rail company, has only one high-speed train (known as “frecce” on schedules) that runs from Venezia Santa Lucia station to Genova Brignole station, which leaves at 3:50 p.m. daily and takes 4 hours and 13 minutes.

There are also regional trains that run every hour—they just take more time and require one or multiple track changes. When you arrive in Genoa, you can take regional trains to other destinations or rent a car for the duration of your trip.

Keep in mind that high-speed trains require making a seat reservation in advance, which you can do online or at the train station upon buying your ticket. Regional trains do not require this.

You can fly from Venice Marco Polo Airport to Genoa Airport, but note that there are no direct flights. The fastest flights connect in either Munich Airport or Frankfurt Airport in Germany, but these 3.5 hour-long routes only happen around three times a day. Many other planes depart from Venice Marco Polo with an end destination of Genoa Airport, but their connecting flights take at least an extra 2 hours.