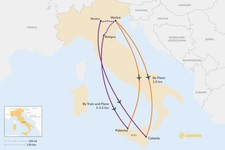 There are 509 miles (819 km) separating Venice from the northern tip of Sicily. With that being said, it's no surprise that flying is the most efficient way of getting between them. From Venice, fly to either Palermo, the capital city of Sicily, or Catania, the ancient port city—both of which are about a 1.5-hour flight away. Just keep in mind that you should arrive at the airport 90 minutes before departure.

If you're not in as much of a rush and would like to see more of Northern Italy, take the train from Venice to either the city of Verona or Bologna, the historic capital of the Emilia-Romagna region. After exploring either destination, you can take a flight to Catania that gets you in Sicily in under two hours. Or, if you want to see even more of northern Italy via a guided itinerary tour, check out this 5-day itinerary that starts in Venice and ends in Florence, where you can catch a flight to Sicily.

Flying from Venice is by far the most direct way to get to Sicily. Head to Venice Marco Polo Airport (VCE) where you can choose between two arrival airports:  Catania Fontanarossa Airport (CTA) in Catania and Falcone Borsellino Airport (PMO) in Palermo. Both routes have a nonstop flight going from Venice to Sicily but usually just one a day, so be sure to check the schedule if you want to plan accordingly. You can also book a flight that connects in Rome, but it will add hours to your overall travel duration.

If you choose Palermo, the direct flight duration is 1 hour and 24 minutes. Once you arrive, take the hourly train from Punta Raisi that is operated by Trenitalia, the government-run train company. The 47-minute journey gets you to the heart of Palermo where you can easily start exploring. If you fly to Catania, the direct flight gets you there from Venice in 1 hour and 27 minutes. Upon arrival, head to the airport bus that will get you into the city center of Catania in a short 6 minutes.

Keep in mind that while the flight is short, you should get to the airport 90 minutes before takeoff.

By Train and Plane

Duration: 5-5.5 hours (depending on how long you stay in each destination)

The benefit of taking a high-speed train for your first leg of the trip is seeing more of Italy than you would from taking a direct flight from Venice to Sicily. Of course, that means the trip will take longer, but if you don't mind and have the time, it can be well worth it. The two main train companies in Italy have direct trains departing from Venezia Santa Luca station: Trenitalia and Italo, a privately owned company.

One option is going to the city of Verona. The high-speed train (or what Trenitalia lists as “frecce”) gets you to Verona Porta Nuova in 1 hour and 10 minutes from Firenze Santa Maria Novella station (seen on maps as Firenze S.M.N.). After spending some time in Verona, take the 15-minute bus to Verona Villafranca Airport where you can take a flight to Catania in 1 hour and 40 minutes.

You can also take the high-speed train from Venice to the city of Bologna, which will get you to Bologna Centrale station in as little as 1 hour and 27 minutes. From there, head to Bologna Guglielmo Marconi Airport and book a 1-hour and 35-minute flight to Catania.