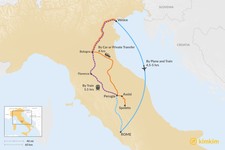 There are 127 miles (204 km) between Venice and the northern tip of Umbria, and multiple forms of transportation are available to make the trek. The quickest way of getting there is by renting a car or a private transfer that allows you to stop in major cities at your leisure, like Bologna and Florence, as well as smaller cities and towns. Plus, once you've arrived in Umbria, you can continue your road trip by venturing around the region.

You can also take the high-speed train that connects in Florence, which takes more time but does give you the freedom to sit back and watching the rolling green hills out the window. Keep in mind that high-speed trains do require seat reservations in advance, while regional trains do not. If guided tours are more your style, take kimkim's 7-day excursion around Venice, Florence, and Rome where you can easily head over to Umbria.

Not only is driving the quickest way to get from Venice to Umbria (without traffic, that is) but it also allows for stopping at various towns and cities along the way. Once you exit Venice, take A13 autostrada (a toll road) to A14/E45, during which you pass by the likes of Padua, Ferrara, and Bologna, to name a few. After getting on A14/E45, head about 50 miles south until you take the Città di Castello exit. From the entry point of Città di Castello, you can easily drive around the region to Perugia, Assisi, and Spoleto, home to a UNESCO World Heritage site.

If your budget allows, consider hiring a private transfer to take you from Venice to Umbria. Not only can you stop at destinations along the way, but you can sit back and release the responsibility of navigation. It's by far the most relaxing and convenient mode of transportation.

While traveling from Venice to Umbria by train requires a transfer in Florence, it's a great way to sit back and take in the views of Tuscany. Head to Venezia Santa Lucia station and take one of Italy's main train companies: Trenitalia, Italy's government-run railway, and Italo, a privately owned company. Direct high-speed trains (Trenitalia calls them “frecca”) headed to Firenze Santa Maria Novella station start leaving at 6:25 a.m. and run almost every hour, taking as little as 2 hours and 5 minutes. From Firenze S.M.N., take a high-speed train that gets you to Perugia Fontivegge station in about 2 hours and 15 minutes on average.

Duration: 4.5-5 hours (plus 90 minutes at the airport before departure)

While it's not very convenient and quite expensive, it's possible to fly a part of the journey to Umbria. Take a regional bus to Venice Airport (VCE), then take a short flight on Alitalia to Leonardo da Vinci International Airport (FCE) in Rome, which takes 1 hour and 5 minutes. Once you've arrived in Rome, take the airport shuttle to Roma Termini station, where you can buy a region train ticket to Narni-Amelia station in Narni, an ancient hill town in Umbria.